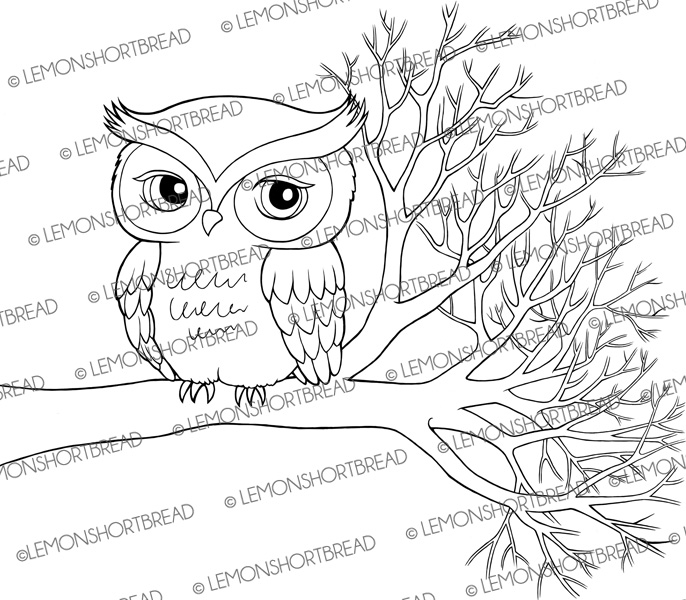 Just out! Versatile owl on leafless branch digital stamp, you can add floral decoupage or whatever you like to swop out the seasons.

Halloween is up next so this is a good time to post my Queen Mary photos from 2010! I was too lazy to post it then and only had it on Facebook albums. Better late than never. 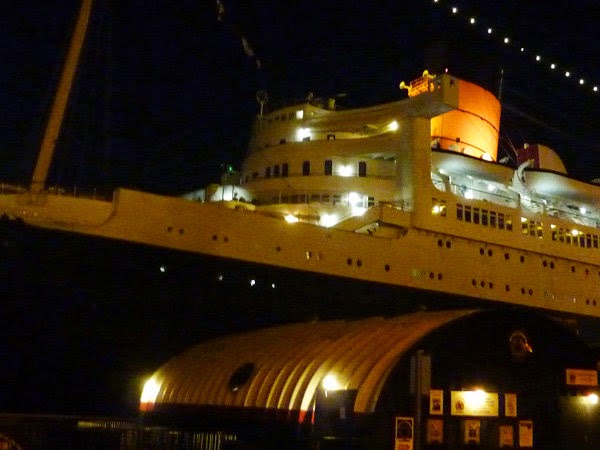 The RMS Queen Mary is permanently docked at Long Beach California and reputed to be one of the most haunted ships around.

The ship's maiden voyage started in 1936 as an express transatlantic passenger liner between Southampton and New York. She was converted into a troopship in WWII and became known as the 'Grey Ghost' for her speed and new camouflage colour. In 1942, she collided with her escort ship HMS Curacoa, killing 239 British soldiers. The ship was ordered fullsteam ahead nonetheless and to abandon survivors, many of whom were killed when the giant propellers cut through them. This is one of the reasons why people believed the ship is haunted besides the other deaths onboard. In 1947 she resumed passenger service, and her last cruise was on (get this) October 31, 1967 (Halloween), arriving on Dec 9, 1967 at Long Beach where she has been docked ever since. 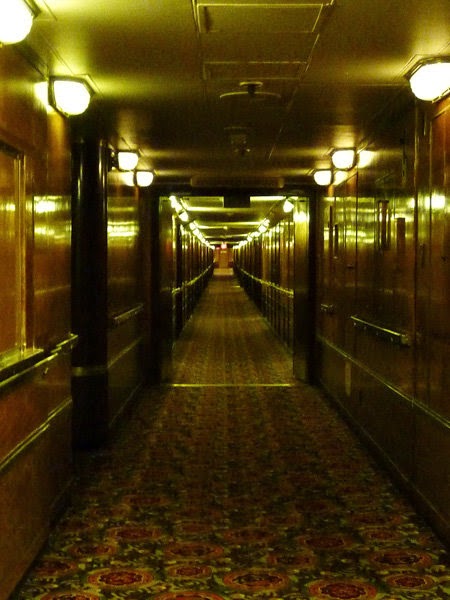 You can freely walk the top deck and the next few levels like the hotel corridors, restaurants, lounges. The infamous pool area and lower decks are out of bounds unless on a guided tour. Here are rows and rows of carpeted corridor, it is easy to get lost since they look identical. It is very quiet and your ears may hurt from the silence. The hotel rooms are still functioning so you should be quiet anyhow. 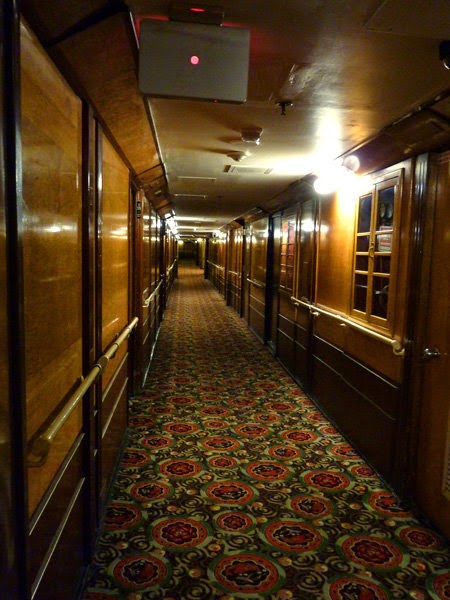 We were there for the Coast to Coast AM 'Ghost to Ghost' live radio talkshow broadcast and for me it was mostly to see a place of interest in California that wouldn't require me to pay. The others wanted to see George Noory lol. Guided tours have a fee so we skipped it and decided to roam as not to make it a wasted trip since there was a small paranormal convention going on, but it was badly organised and we backed out very quickly after they wanted to charge us too much money. 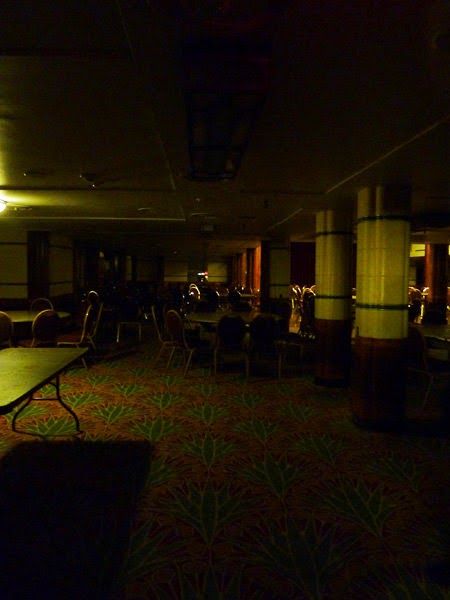 A banquet room. We peeked in, we were curious because it was so dark in there, I had to turn on the flash on the camera. 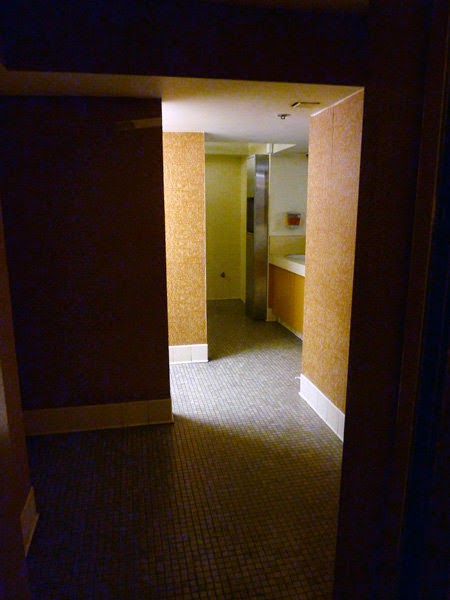 The bathrooms were nice, just dark and eerily quiet. It had one those annoying eco-lights that would turn off if it determined no noise = no people. We were deep in the ship so that was unsettling. 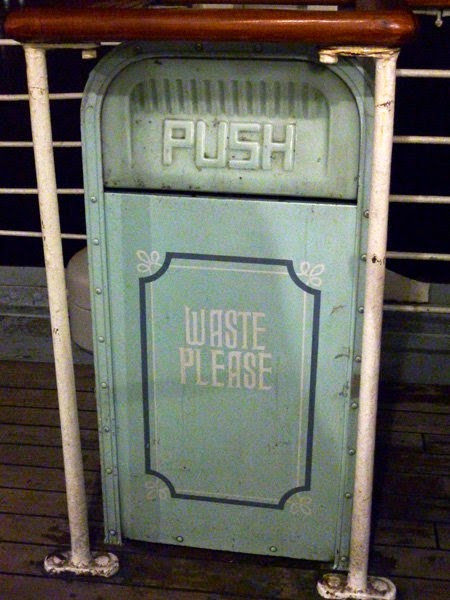 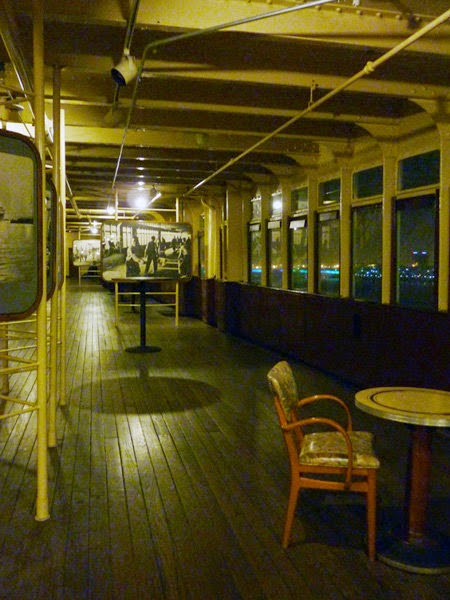 One of the exhibit areas. 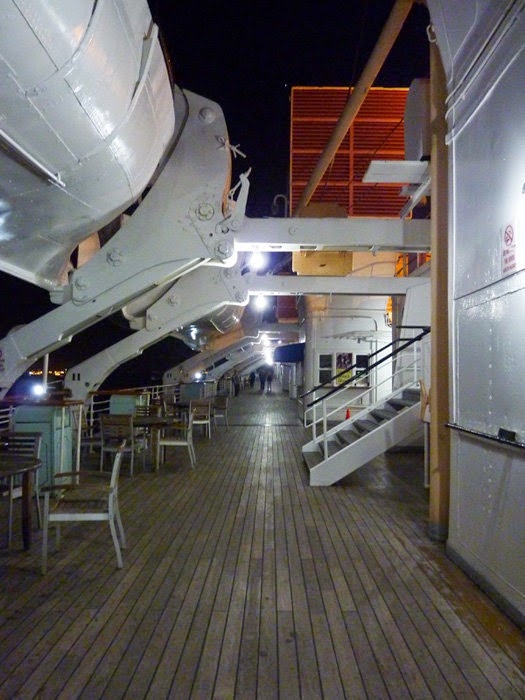 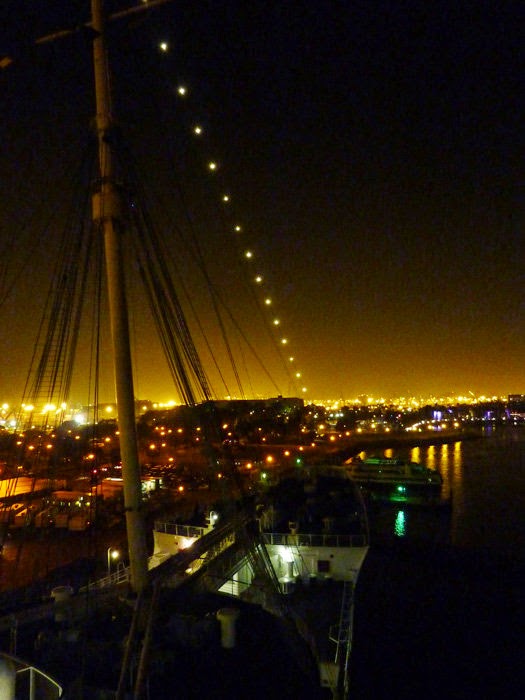 One of the views overlooking Long Beach. 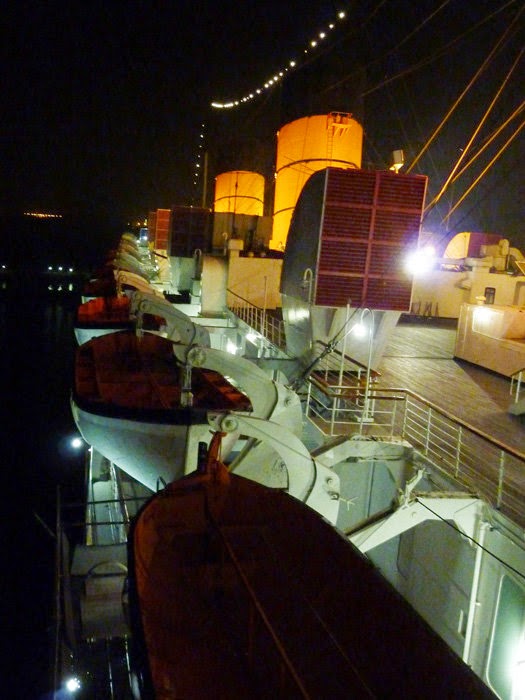 Life rafts on the sides. 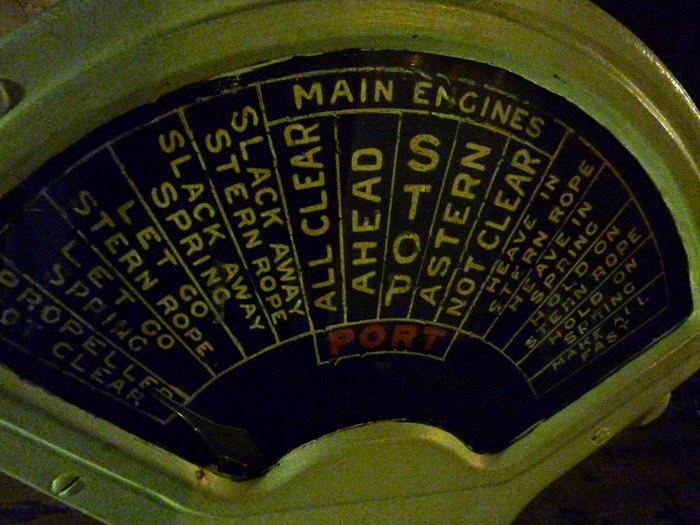 You know Singaporeans call reversing a car 'Go Stun', actually it came from the phrase 'Go Stern' like the back of the ship. 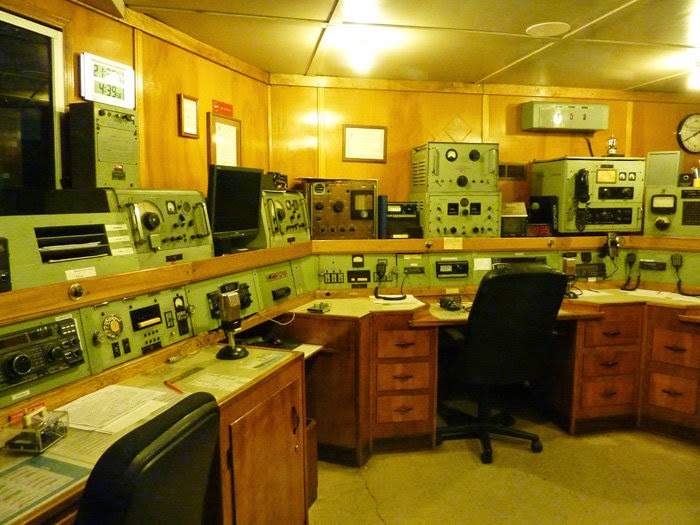 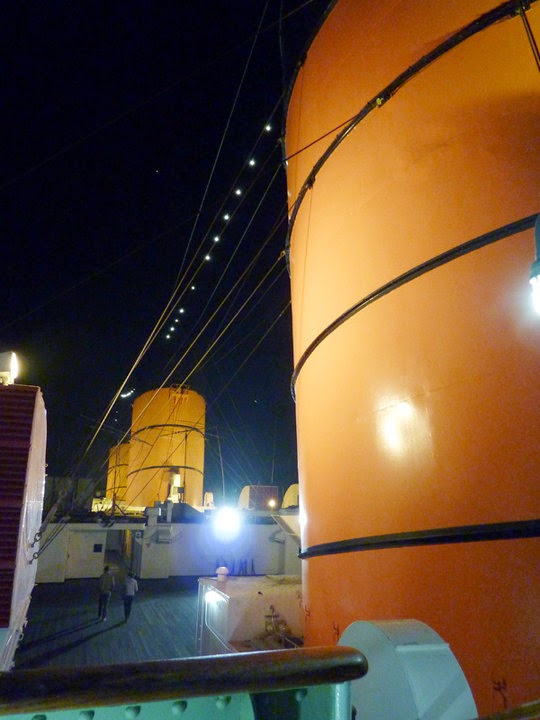 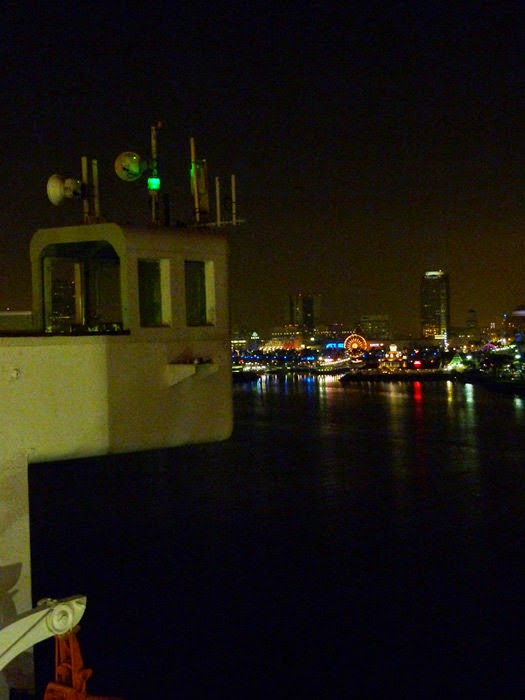 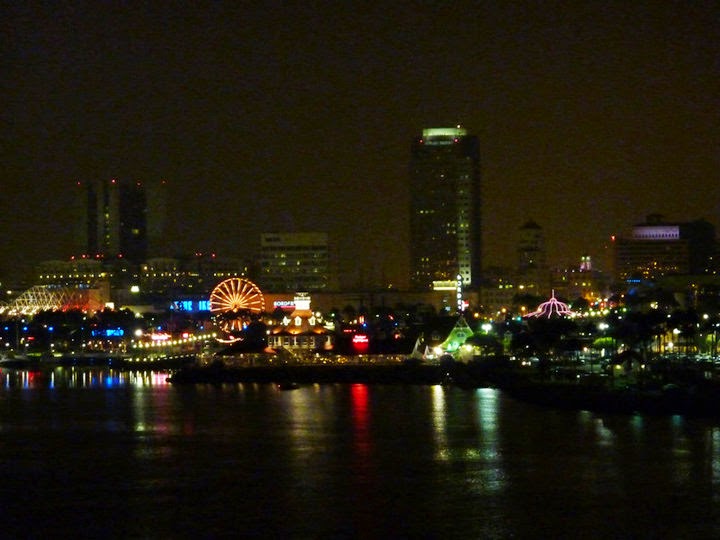 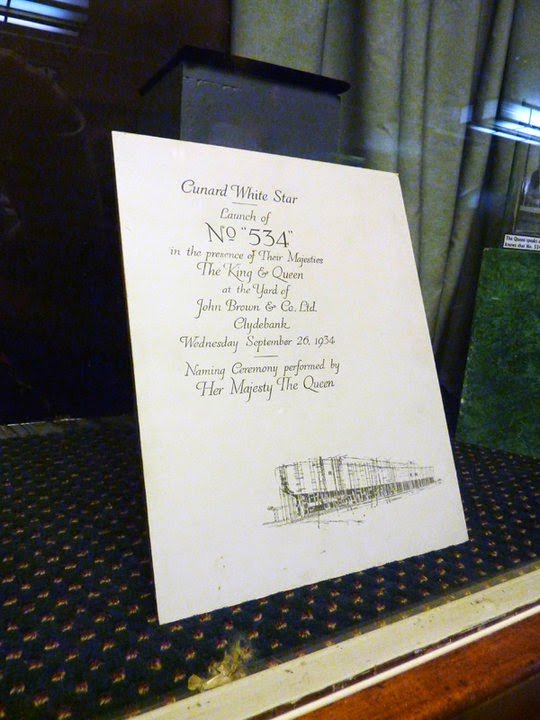 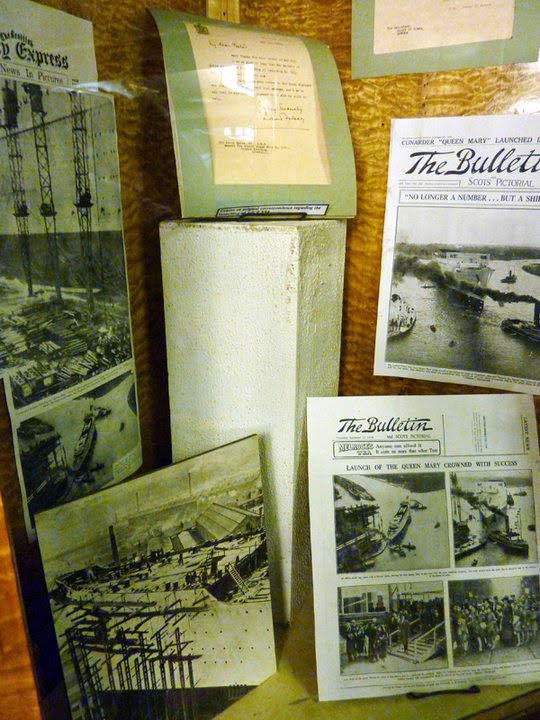 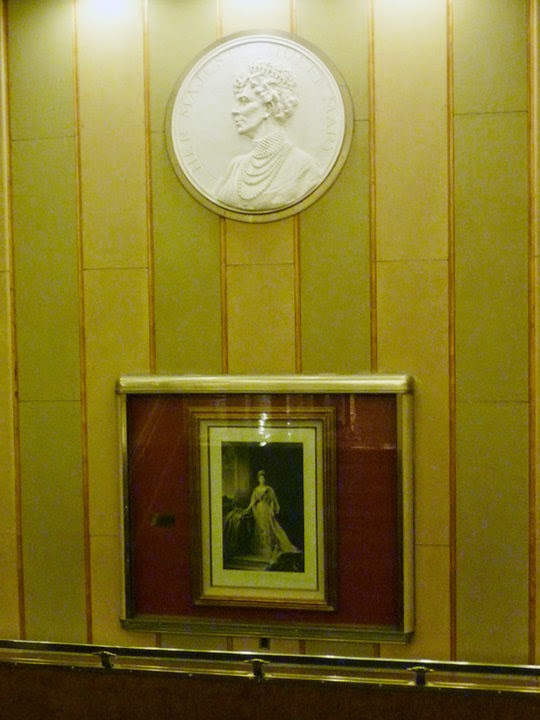 In case you were wondering, yes we saw George Noory. There was actually a crowd gathering outside the small lobby and you can look through the glass window and watch them chat! And no, we did not see any lady in white!
Posted by Lemon Shortbread 3 comments: 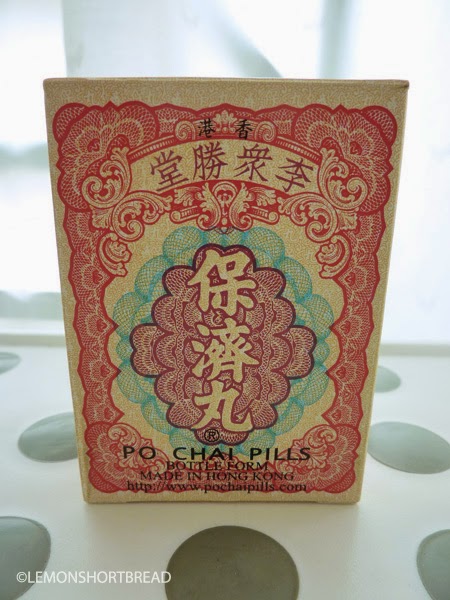 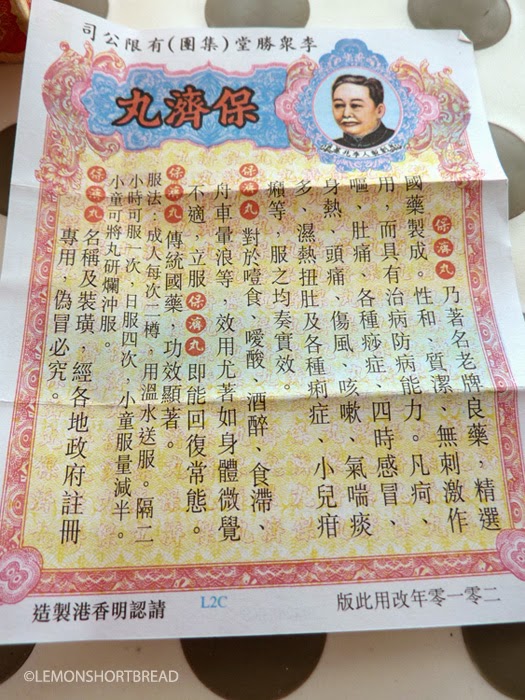 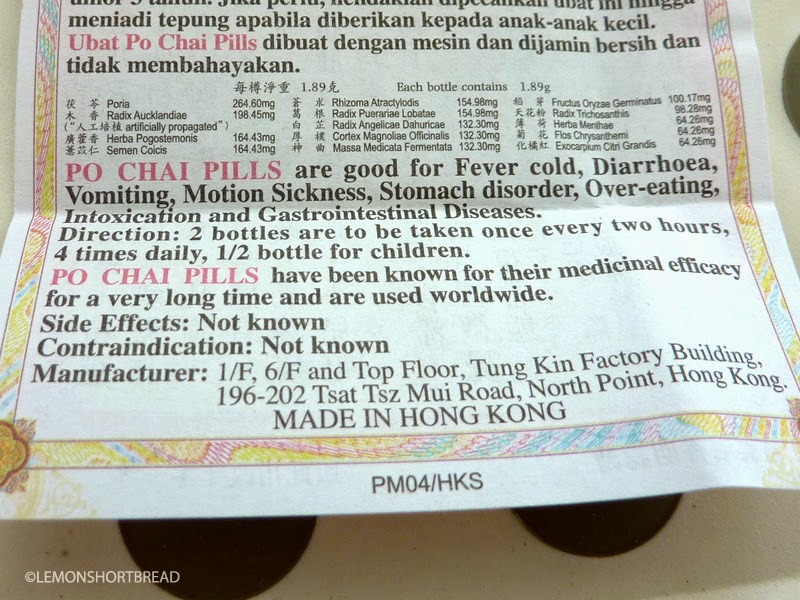 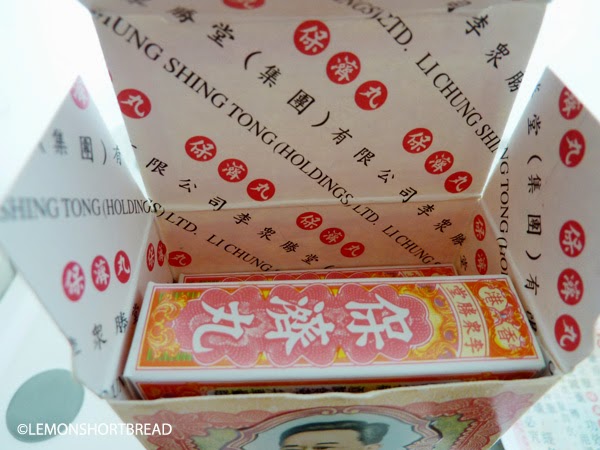 Back in 2010, the Po Chai in capsule form were found tainted with cancer-causing chemicals and both products were banned in Singapore, the capsule form is no longer in production since they aren't even popular to being with; I never knew they came in capsules either. The pills are not tainted so the ban on those were lifted shortly. They are available on Amazon if you do not live in Asia.
Posted by Lemon Shortbread 2 comments:

New freebie digi stamp for Halloween or if you like the creepy crawlies... 'Smiling Spider'! 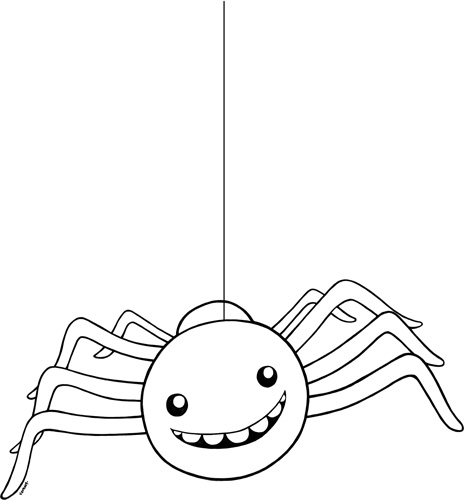 
TERMS FOR USE:
- For personal use only, commercial use is not allowed.
- Please keep the signature on the image.
- A link-back or credit is much appreciated if you are posting your crafts online.
- If you want to share or blog about this, please do not place the full-sized image for download on your site or on Pinterest, instead link to this page.
-  Please do not share the image off-site, but direct your friends, followers or team to download from here.
- Please grab yours while the freebie is available. Once it is gone, please do not share it, it's yours to keep and yours only! I will put an expired notice on each freebie that has ended its run.

I'd love to see your creations, please leave a shout-out in the comments section, or tag me in Facebook, and your work may be featured here or I will create a Pinterest board featuring everyone's work. You can use the badges listed on the 'Stamp Badges' tab on top if would like to share/credit my image, thanks and have fun!
Posted by Lemon Shortbread No comments:

Woohoo! Here's to my completing a set of Christmas shoujo girls! I hope you like them. They are all instant downloads available in my Etsy shop, 300dpi in 7 inches height. 'Christmas Glitter Shoujo' is 8 inches. The linearts make wonderful colouring pages as well as they are highly detailed and clean. Each girl has a slightly different feel (era-wise), 'Ornament Shoujo' looks the most modern out of them all.

ROLLING OUT THE CHRISTMAS DIGITAL STAMPS

New Christmas digital stamps are out! I may roll out a few more of these kitschy funny images by Dec (maybe not), there are just too many ideas to draw out so I am posting early for Christmas promotions. I will have a winter/christmas related freebie soon so stay tuned... actually I may backtrack a little and post more autumny things since there is still time.

I just purchased this makeup remover from Sasa, one of their inhouse brands: Cyber C'kin EX All-in-1 Moisturising Cleansing Water.

My previous brand was Haruhada Collagen Moisture Cleansing Water and I was planning to purchase a replacement bottle but Haruhada's one was so large and took up too much real estate in my travel luggage. I never got to finish it despite using it to the best of my wastage abilities lol. That's not a bad thing though, but since Cyber C'kin had a promotional offer at 40% off (making it a dollar more expensive than Haruhada... I paid about $18.90 compared to $29.90) and the sales promoter was pushing it, and it was a better size, and the ingredients looked ok, I decided to try it out. 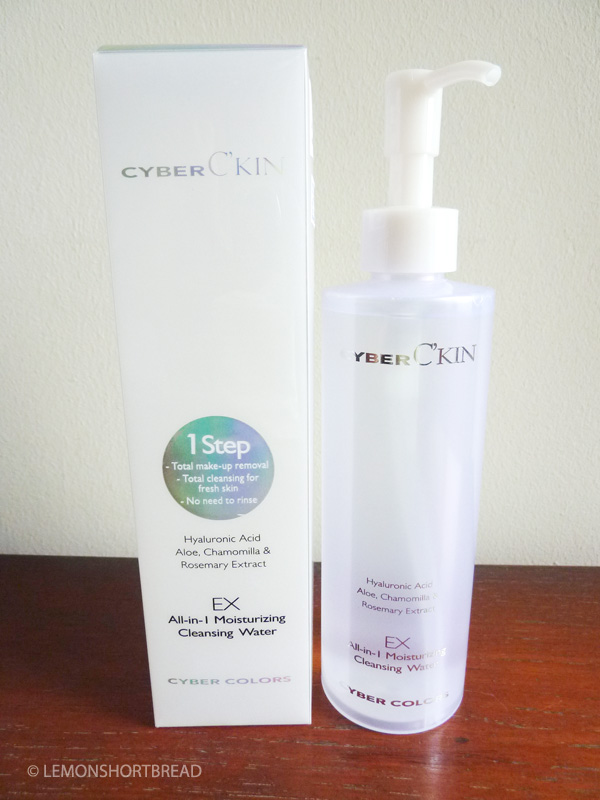 First off this is a non-oily cleansing water, so it will not remove waterproof make-up. I use this primarily to remove foundation mineral powder and maybe sunblock. No rinsing is required but I do it if the humidity irritates my mood. It does not have parabens but contains other chemicals which you may be sensitive to. It is perfume-free, so it has a typical scent you get from perfume-free products... I would call it a waxy smell with a hint of chemicals? 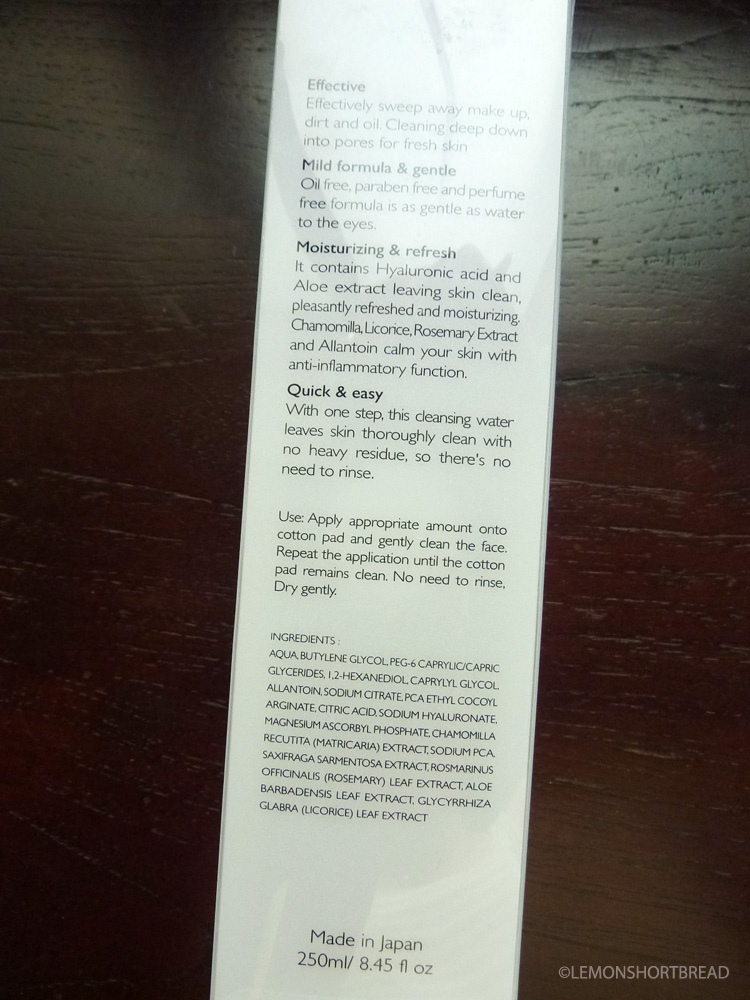 Made in Japan, it removes powdered makeup easily, I seldom use thick layers so one to two cotton balls are enough to rid my face of gunk. It doesn't tighten the skin nor make it oily or sticky, depending on your climate. It has a humectant feel if you have ever used hyaluronic acid products, you will know what I mean... so one of the positive thing about this remover is its hydrating properties.

To remove waterproof mascara and eyeliner, I use the Cyber Colors Gentle Eye Makeup Remover: 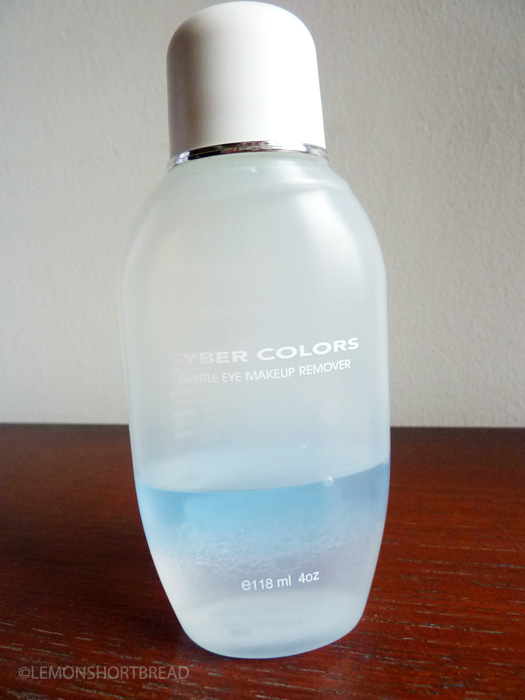 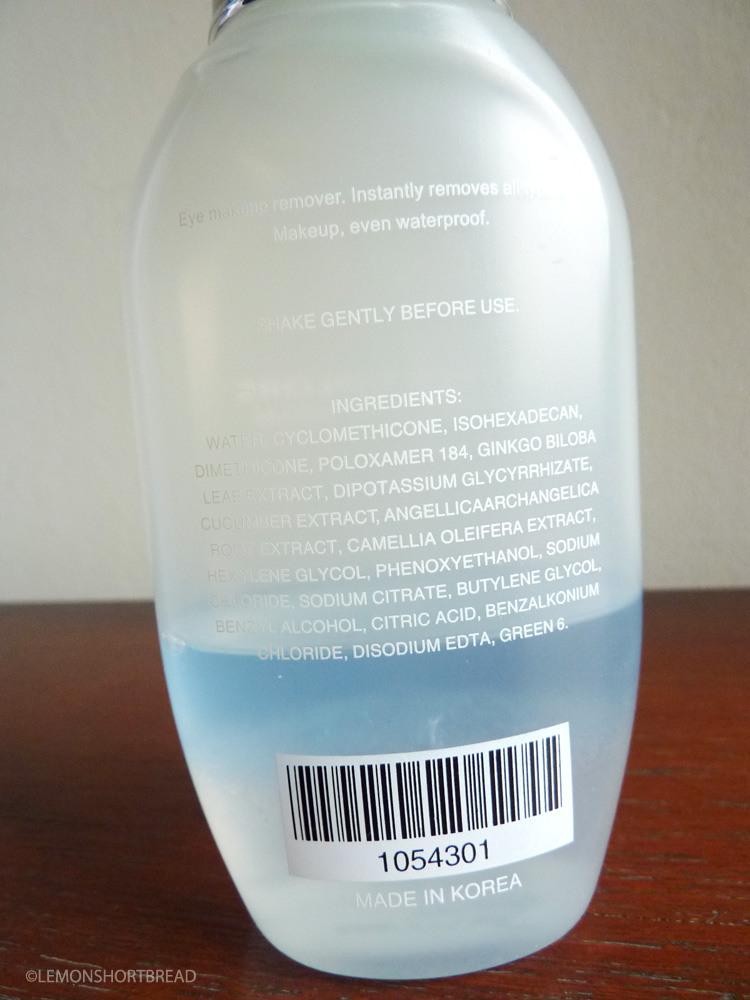 As you can see, this is not a new bottle as it is more than half gone, I have had it for some time. This is effective at removing waterproof makeup (probably better ones out there but this satisfies). The most important thing is, it does not sting even if it gets into my eyes! So soak a good amount into a cotton and leave it on your eyelashes for a while to dissolve the mascara, and wipe/dab off. It rids eyeshadow and non-waterproof eyeliner easily. For waterproof mascara (note I do not use a lot of mascara) I usually do a second round to completely get it off. My first eye makeup remover in the late 1990s was by Fasio, and boy did that burn!

Cyber Colors remover is blue & clear, you'd have to shake it before using as the oil & base solution separate if left unshaken. It is moderately oily but nothing that bothers me since I wash my face right after.

Three cute digital stamps with the common theme of presents! They are designed in a way to be useful for any gifting occasion besides birthdays. With a tweak of colours you can craft them for upcoming Christmas too. These digi stamps are available as instant downloads from my Etsy shop.