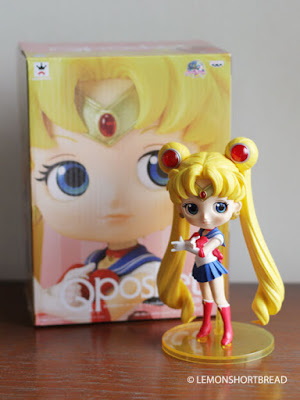 This Q Posket Sailor Moon released by Banpresto is really too cute! She resembles a miniature Pullip with her oversized head, large eyes and thin lips. She also comes with a yellow transparent stand to support her head because this figure weighs pretty heavy for its size (14cm height). She has the classic Sailor Moon pose. 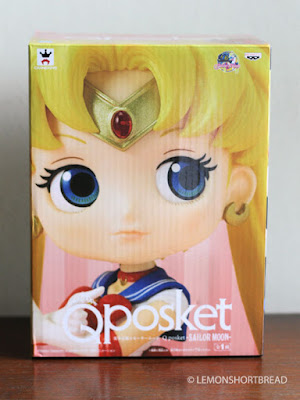 Purchased this for SGD$30.00 at TOG (Toys or Games) - I think formerly known as Comics Connection (r-i-p). Like my previous post about Banpresto's Girls Memories Sailor Moon line, the box has no window but the picture on the packaging is pretty accurate, and maybe a bit more adorable in person! 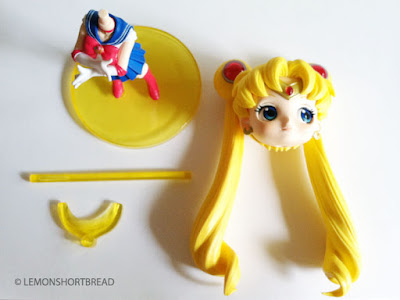 Sailor Moon comes with a separate head and body. I had a difficult time placing the body into the holes of the stand, because her legs were spaced too close when out of the package and it was maybe 0.5cm off from the holes! Trying my best not to break the hips whilst using some strength to pull her stiff plastic legs apart, and then hearing a sort of crack sound after doing that (!) I wondered if it was a defective piece. Anyhow I decided to let my bf try it. He got it in 2 seconds somehow.... 'You need to use some force' he said. 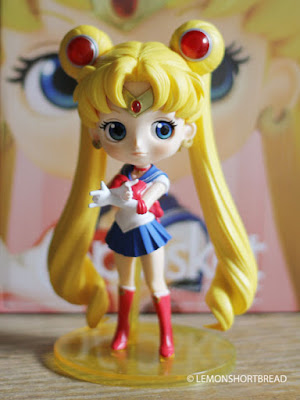 After assembling her, she is adorable! Her hair isn't flapping in the wind nor her skirt so the atmosphere appears static, giving it an even more Pullip/Blythe doll vibe. This figurine looks dimensional in person. I like the heavy bottom curls that fits the chibi style. The bangs are slightly separate from the headband which was nice. 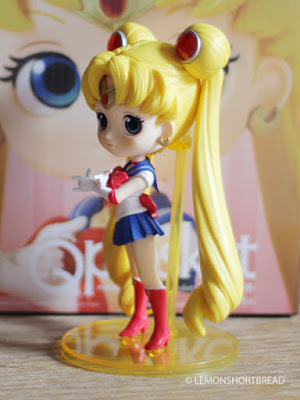 Some seams on the sides, and the white paint on the boots are a little unsteady. The red transparent circles on her buns are a good design idea, rather than the usual painted red types. It gives the hair accessories the proper reflection and depth like in the comics. 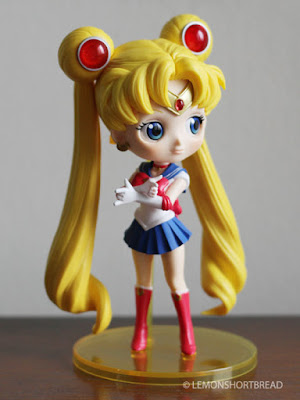 Her skin is peachy-beige with a peach blush, not quite the pale eggshell you see from the photos, I do like the tone of it. 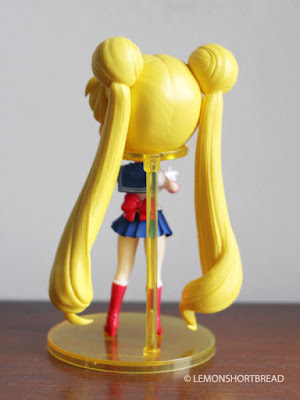 Her hair is a pearlscent deep yellow. You can't quite see it from the photos but it has a slight shimmer when light hits it. 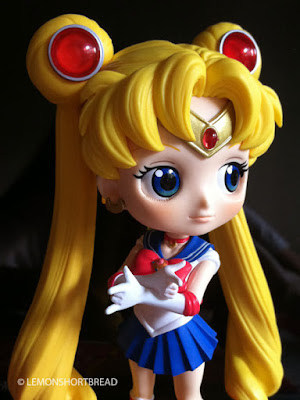 Her eyes are glossy, don't think they are glass, maybe a decal? It does give an impression that the eyes are separate pieces from the face. She has one white printed reflection and the other one is reflection from my window! Her irises have a green to dark blue gradient. 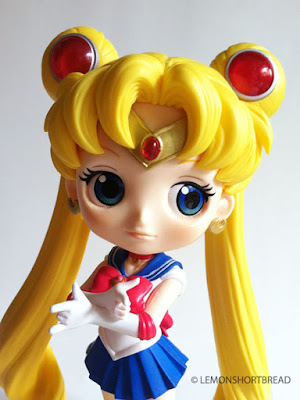 Can't wait for the rest of the line to be released!
Posted by Lemon Shortbread

She is adorable. I would have a hard time placing her head on as well