CHINESE NEW YEAR 2016 - MORE LIKE YEAR OF THE MONKEY KING 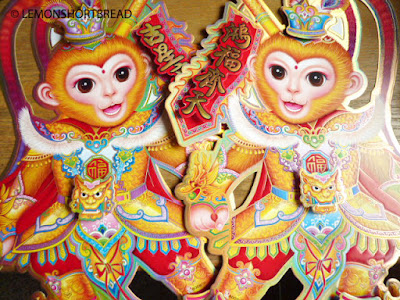 It is Chinese New Year tomorrow, 8th Feb. So let's get the greetings out of the way:
祝新年快乐，步步高升，国泰民安，万事如意! Alrighty.

2016 is the Year of the Monkey, and boy is it a monkey-fest. The monkey mascot - particularly Monkey King Sun Wukong - is everywhere, even on my juice box. Check out the various wall decor - chibi, cartoon, Alakazaam (anybody? lol) but mostly the golden monkey style. Everyone is calling it the Fire Monkey year this time (last was in 1956) so Sun Wukong fits the bill. The ones above are giant-sized with hologram edges and layered. This is definitely the cutest design available around my area. Monkey looks like a kitty cat! 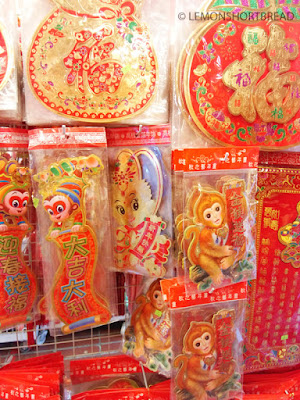 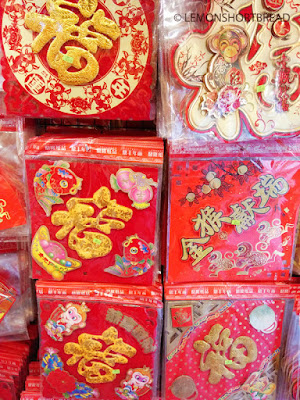 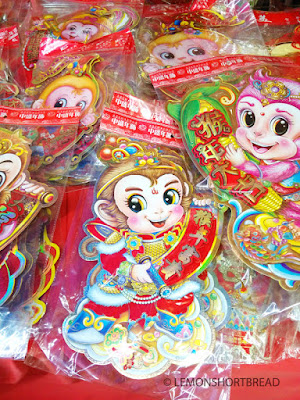 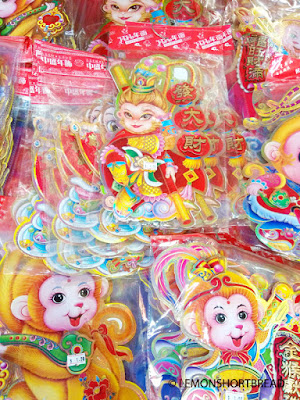 Talking about Sun Wukong, there is definitely a renewed interest in 'Journey to the West', because there is not one, not two, but THREE! Journey to the West movies in the works. I mean, we get a new re-imagined Monkey King movie every so often nowadays but it is clash of the titans right now lol. I was like... what really? Have the chinese run out of material to shoot? Well it's mainly about the $$$ but sheesh.

One is called Journey to the West 2, which is the sequel to a parody-style Journey to the West movie made by Stephen Chow in 2013. It was ok as a standalone movie if you have never heard of the story or don't mind blasphemy lol. Not to my liking since it was as close to the source material as me looking like say... Angelina Jolie. The movie is scheduled to be released in 2017. 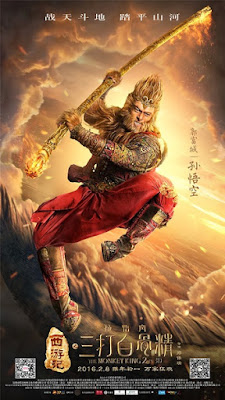 The other is "The Monkey King 2", starring Aaron Kwok as Sun Wukong and Gong Li as the White Bone Spirit. This is the sequel to The Monkey King movie from 2014, where Donnie Yen was the monkey, and Aaron Kwok was the Bull Demon King.... playing musical chairs here. Why did Donnie Yen not reprise the role? He was the action director then as well. I reckon because of Ip Man 3? Or something called Star Wars: Rogue One??

The Monkey King 2 will be released on New Year's Day 8 Feb. Unfortunately the first film was average script-wise, though it boasted many big stars and spectacular special effects... This new one has Sammo Hung as the action director but Aaron Kwok doesn't do martial arts. I'll probably just watch one of Sammo's old movies. 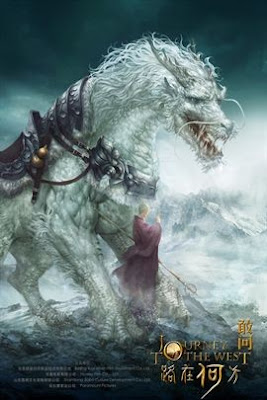 The third one, which is highly anticipated, is a China-Hollywood collaboration that will be released this year and includes the original cast from the 1980s TV version, yes Liu Xiao Ling Tong & friends yay!

It will be in 3-D. I have a feeling it may emphasize more on special fx than story development, but will try not to compare it to the TV drama. No premature judging here. Anything with Liu Xiao Ling Tong & friends in it is fine by me, since this is likely one of the last, if not THE last chance to see them reunite on screen. Don't care that they have aged now. And looks like Liu Xiao Ling Tong is the director so that will be interesting, since he is always lecturing about how other adaptations shouldn't mangle the source material. He should be the most likely candidate to respect the novel, in essence at least. And come on it's Liu Xiao Ling Tong, the friggin Mei Hou Wang.

Yeah and I'll be expecting to see him in the CCTV New Year Special, we've waited 12 years thank you very much. If he is not invited, then that is a mega fail, unless he is appearing elsewhere. My 1986 Journey to the West review has the 2004 new year segment video at the bottom if you want to check it out. I recall that year it was a last minute inclusion as well, I mean why would you NOT invite the most famous monkey king to perform in the monkey year?

*Edit 10 Feb: Never mind, CCTV special is um... let's leave it at that, that's why I never watch it hahaha. My Journey to the West review part 2 is up next and I'll put his CNY segment by Liaoning station there.

*Thanks Robin for the Liu Xiao Ling Tong's Pepsi ad* He also has another movie, based on the Zhang family's monkey opera legacy, out this year. Heard he is playing his great-grandfather, grandfather and father's roles. Reminds me of that drama Houwa 猴娃, an autobiographical account about his dying brother. 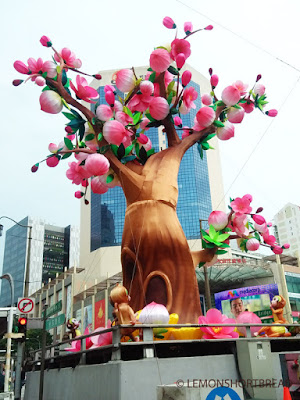 Anyhow, I went to Chinatown with my mom on Thursday to get some new clothes for her and check out the lights. The theme was monkeys amongst peach trees, inspired by the Monkey King's Mountain of Fruit and Flowers. This is the back of the main display when they were setting it up earlier on. 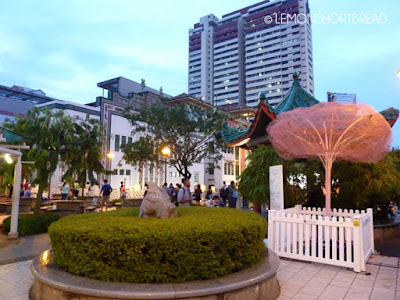 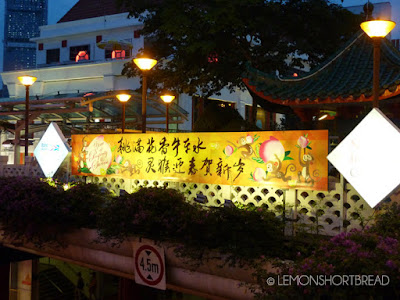 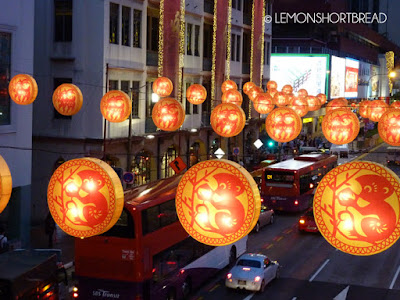 You can watch the streets from the bridge. The dangling lanterns show the 12 animals of the Chinese zodiac. 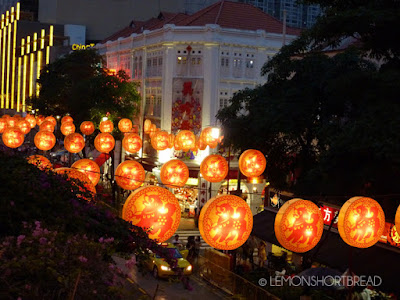 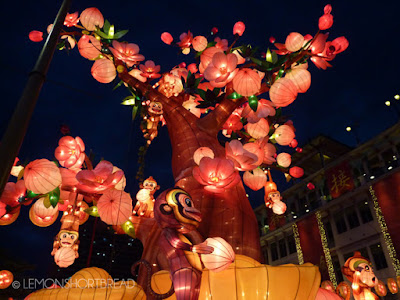 The display at night, set in the middle of the street. It was raining earlier but had stopped by the time I took this, thankfully. 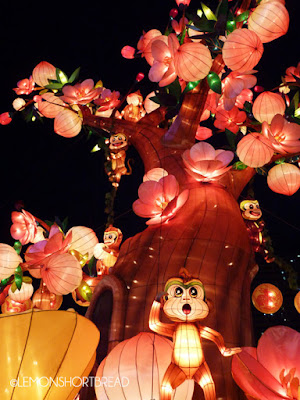 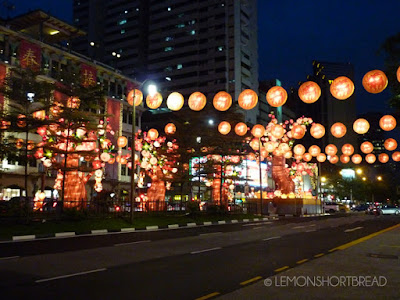 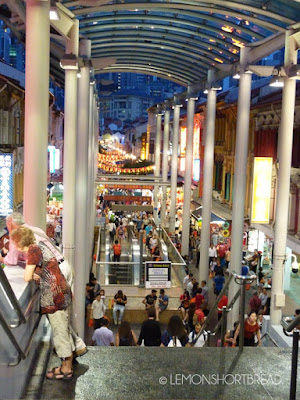 Heading towards Temple Street which we didn't bother to, since we had already got shopping done. The street was okay crowded for new year's standards and it was only Thursday. 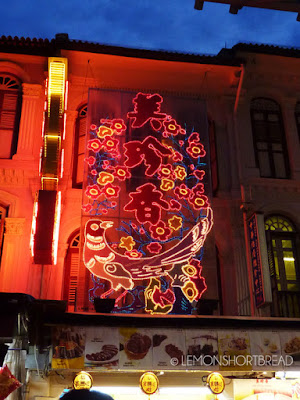 The store lights at the one of the BBQ meat slices store. We plan to get ours near home, the waiting line for the most popular shop was having their yearly snaking queue around the corner.

So I didn't get new clothes, but did manage to snag a super cute old-school Japanese ice shaving machine at the 2nd hand store! Not quite new year material but it was soooo cute even as a display. An old uncle was intrigued by it when the cashier opened the box for inspection, but no it's mine now lol. Will show it off when I have time.
Posted by Lemon Shortbread