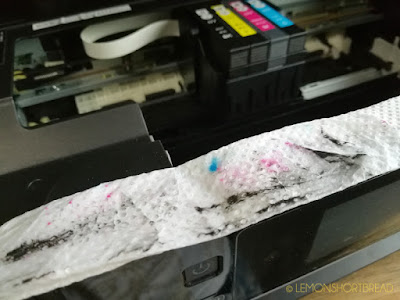 Epson I'm gone. I think I'm going back to Canon. I don't even remember why I switched from Canon years ago. I think it was because I wanted a laser printer, and ended up with a Samsung laser printer that turned out to be garbage. Then we got an Epson because Epson can churn out nice prints.

Admittedly I seldom used the printer so there were bound to be problems. It worked great at first, and then after some time the printhead became easily clogged despite running maintenance (which probably compounded the problem). However my first DIY cleaning was a success, I got the black to work perfectly for around 5 months. I happily inserted packing slips into my packages and printed government pdfs. The CMY colours didn't work though, as the cartridges were almost empty so I printed exclusively monochrome. Then I really wanted to print brown lines and thought to clean the other coloured nozzles. Big fat mistake. Now the black doesn't work at all. The printhead and nozzles are completely kaput for some reason. I wondered what I did different?

Anyhow gave it another try today after spending 4 hours of a failed attempt yesterday. By now I'm ready to throw in the towel but have spent good $$$ on new (yes GENUINE) cartridges and already fitted them in.

My rationale was concluding maybe yesterday's fiddling loosened the pesky dried ink overnight. Maybe I inadvertently introduced air pockets in the delicate mechanisms or something. Well, the printhead is squeaky clean now. I used a 27gauge needle and syringe to make sure the nozzles came out clear when flushed with Windex. 150 paper towels and tissues & 100 cotton bud q-tips later I am quite confident the printer will finally work.

Plugged it in. "CARTRIDGE NOT RECOGNISED - BLACK. REINSTALL CARTRIDGE".

What and why?! It was recognised just fine just now?!

8 hours of my life wasted and an added sense of frustration, thus this blogpost. I could've finished my illustrations. I could've primed my two canvas that's sitting in the corner collecting dust. I could've cleaned my room. I could've written a symphony. But nooooo, was flogging a dead heap of black plastic that is certainly self-aware. It doesn't want to be helped despite my sincere intentions. I gave it my best shot really. Maybe I was too rough with it? Well then, enjoy your time in the trash heap.

In fact I could've posted about my March Field Air Museum trip from last year which I have procrastinated for a while. I'm going to do it now and schedule it for the day after. So see you in my next post and apologies for reading my rant if you made it here ;)