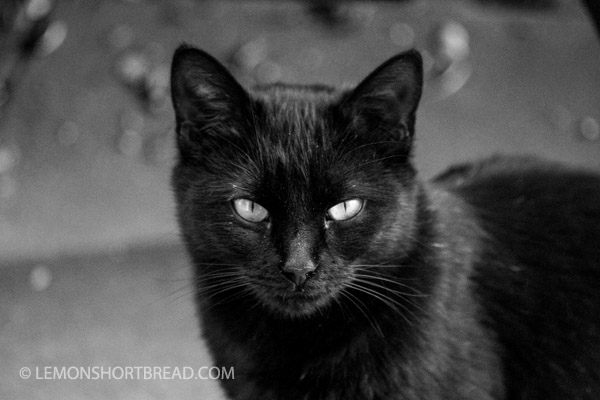 Introducing Lupin, our semi-new black kitty. It arrived at my boyfriend's house porch out of the blue one day a few months back - this is in California by the way. They say a cat chooses its owner - this is absolutely right. 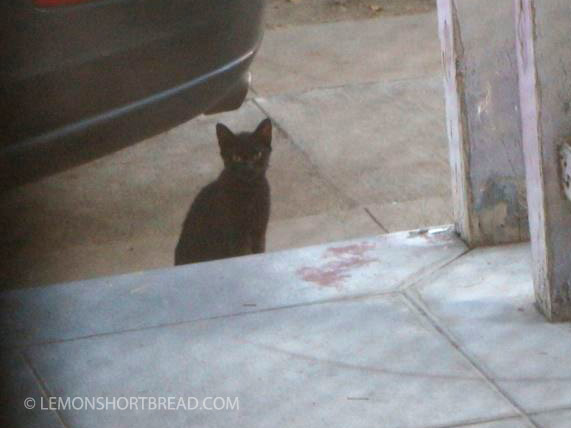 This kitten was feral and following an orange cat with his other kitten siblings earlier and the gang stopped by the house at a water puddle. We don't know how Morris (what we call the orange cat) is related to them, but after a week one of the black kittens returned and permanently stayed, with Fuman who readily accepted it. Don't know what happened to the rest of his siblings but we know one sadly got killed on the road. 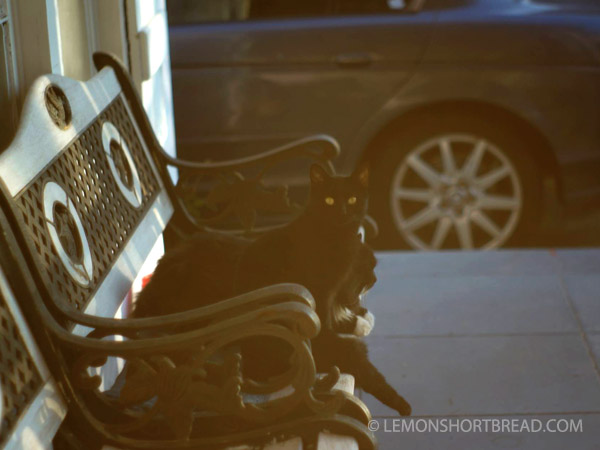 The photo above is Lupin with Fuman in the background. 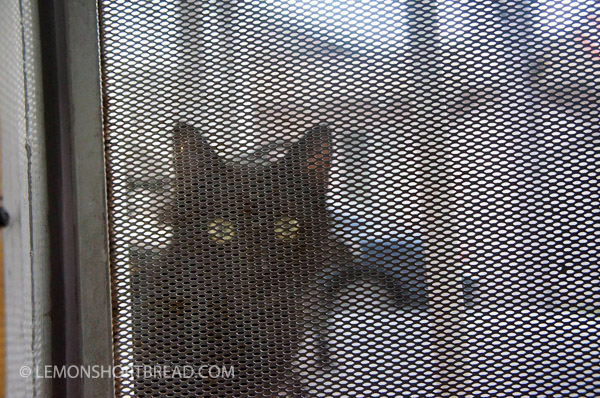 Lupin is very skittish and refuses to let any human touch him/her or get close, although it meows very loudly and does the slow blinks. This is a problem since if it is coming 6 months old we need to neuter it, we still can't tell what gender it is! Lupin's name is from the 1960s-80s manga/anime Lupin the Third (ルパン三世 Rupan Sansei). We have a Lucy dog, a Luna black kitty (died, Lupin looks just like her) so now we continue the Lu-name. 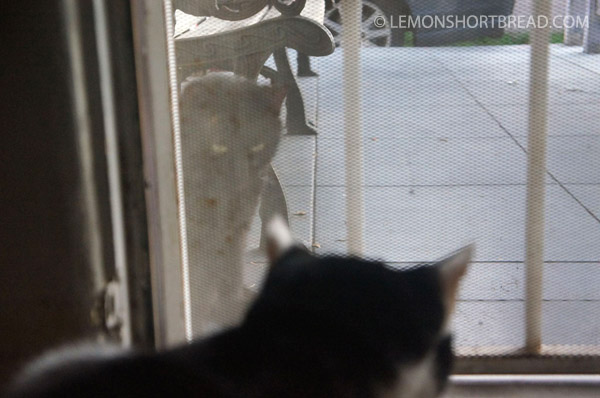 Initially Lupin hissed at Kiwi cat at the door. Understandably it can't see in and smells all sorts of strangers, but Kiwi can see out lol. It doesn't do it anymore once it figured out Kiwi was just another cat. 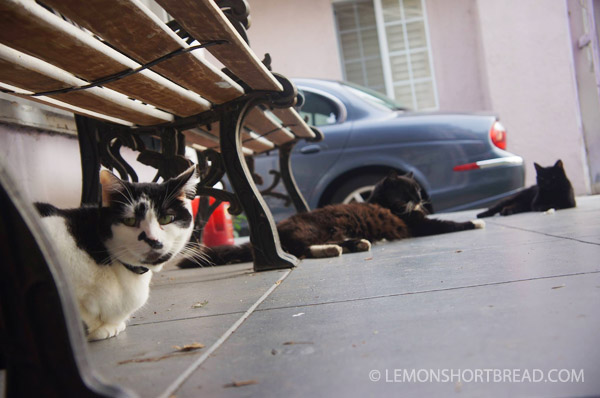 This is Kiwi, Fuman and Lupin taken about a week or two before Fuman died. 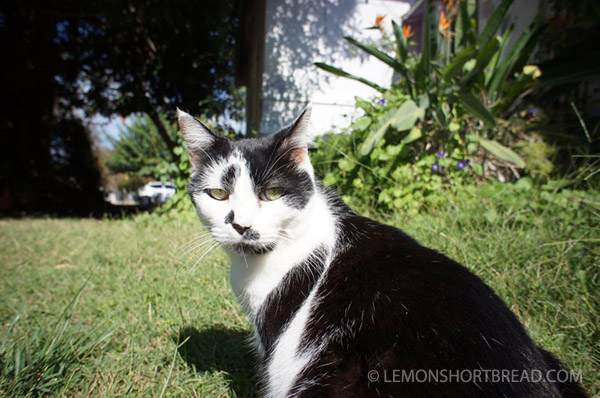 Next is Kiwi, she has been with us for maybe 5 - 6 years. Kiwi used to be an outdoor porch cat and absolutely refused to go indoors for years, scrambling out the door whenever she was curious enough to peek in (she never fully came in anyhow). One day she decided to relocate indoors two years ago and stayed put, and if you put her outdoors she freaks out and dashes back indoors... sigh cats.... Nowadays she gets occasional sunshine under monitor. She watches her cat tv out the screen door and the dogs on top of the couch. 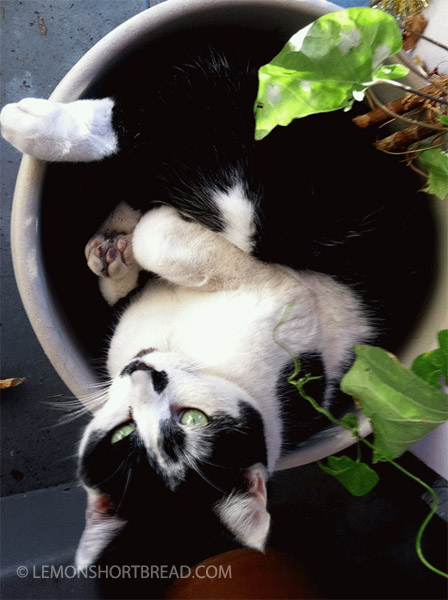 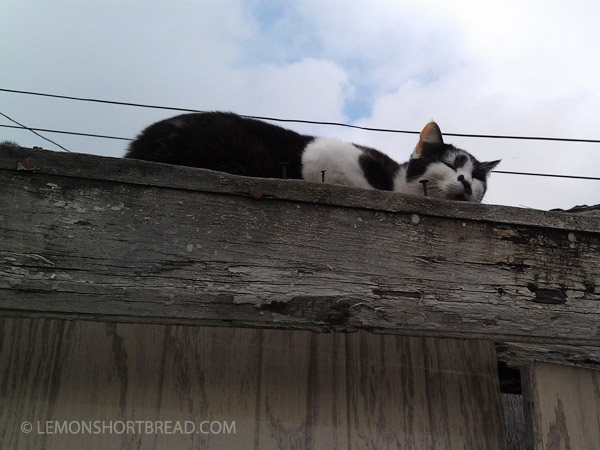 Kiwi came over from the neighbor's across the street, also out of the blue. Just came to the porch, laid there, refusing to leave. We used to see her brother lounging out on the pavement but have not seen him for a few years now - hopefully he got kept indoors too. 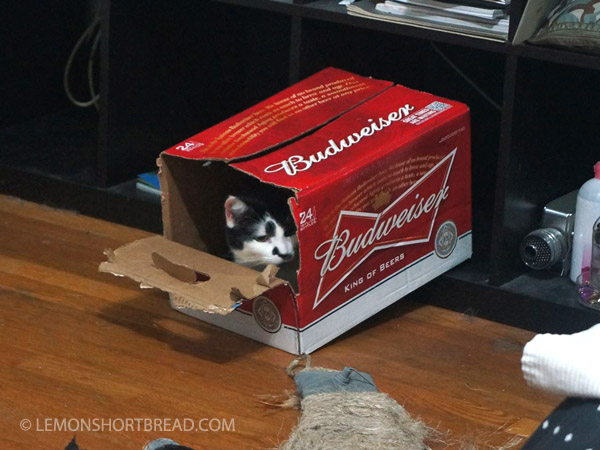 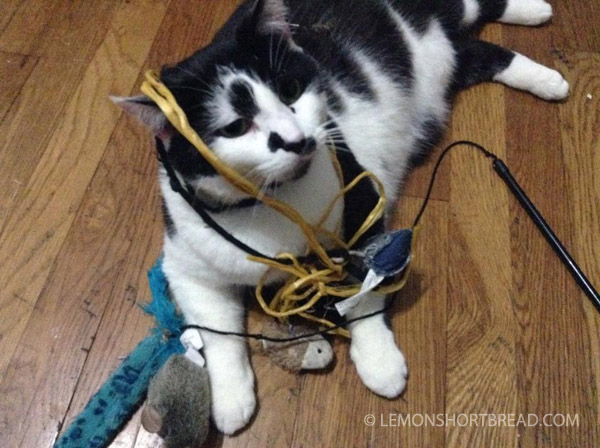 Enjoying life as an indoor cat. When she wants to play, she rubs against your leg and sits down with her back facing you, waiting for you to jiggle her toys in her face lol. She is a bit violent when playing with them. 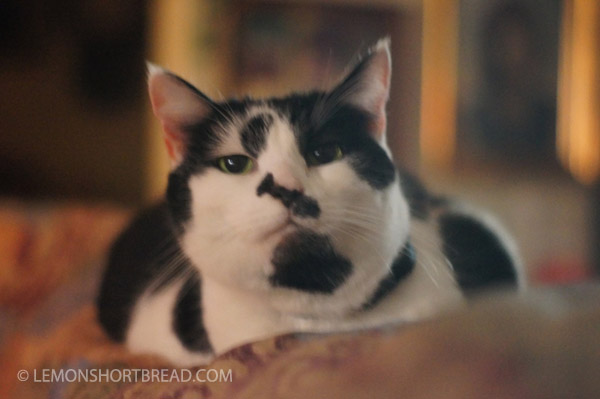 Kiwi is a very clean cat, she grooms herself over and over so her fur is very soft. However she sheds like crazy, whenever I go to the US, I get pretty bad nasal allergies from her dander. Her moustache is fish-shaped and uncannily resembles her favourite kibble! She is also gentle and patient (to humans at least, never bites or scratches) and a good rat catcher. She likes to troll one of the very timid female chihuahuas (Dotty) by staring down at the end of the corridor and blocking her way. Lucy dog has no problems and walks past looking at them wondering what's going on. 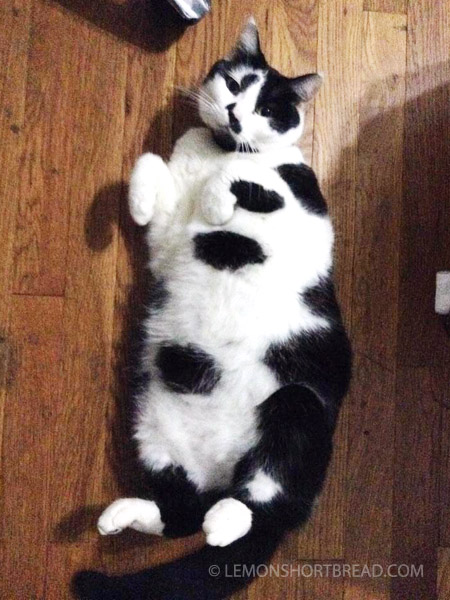 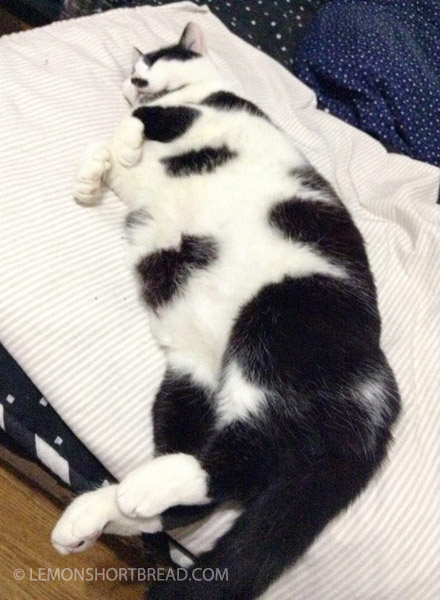 She has gained a lot of weight since I left last year. Partly due to losing a staff who would play with her whenever she demanded it - acrobats at least twice a day lol...  Now she only has bf left and no more acrobats. She is spayed but got so big everyone wondered if she was pregnant! She managed to lose some weight after she decided she wanted to play again, for a few months she wouldn't play and only ate, slept and groomed all day long. The funny thing is she has short stubby legs so her tummy looks like it touches the grass now! 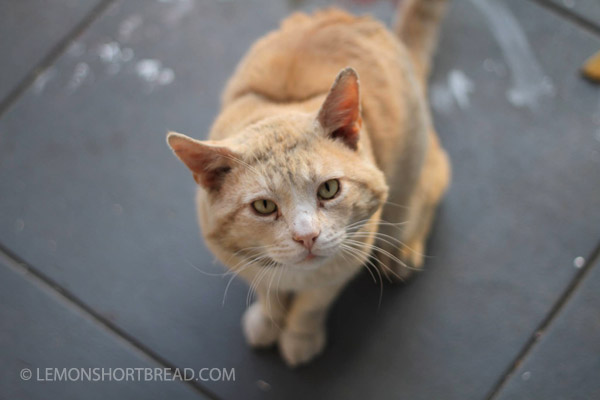 There is a new cat on the porch since 3 weeks ago, the orange cat Morris we mentioned earlier. He actually dropped by for a few minutes the same day Fuman died. I've heard that a new cat immediately takes the place of another cat's territory once the latter's gone, but his pace was too quick! I can only deduce he was hungry, or his rival was gone, or both. 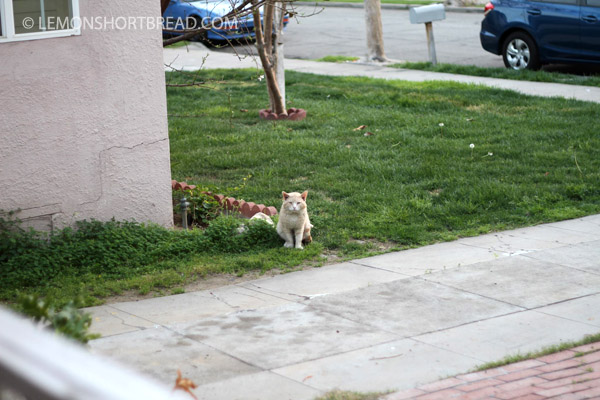 Anyway, this was the then unnamed ginger cat that arrived the day Fuman died. 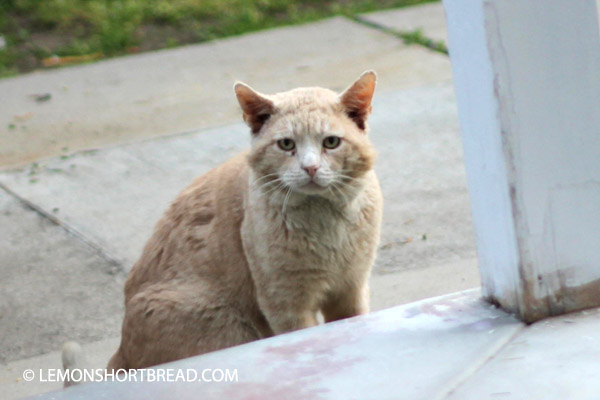 Coming closer, and sniffing around. Bf did not feed him then because we don't know if he was someone else's pet or curious. 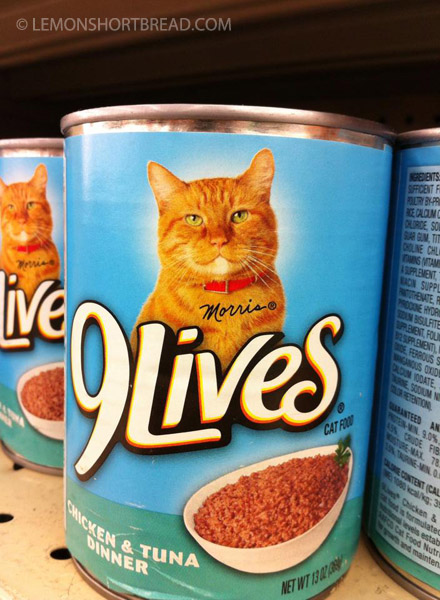 You might have figured out why we call him Morris. 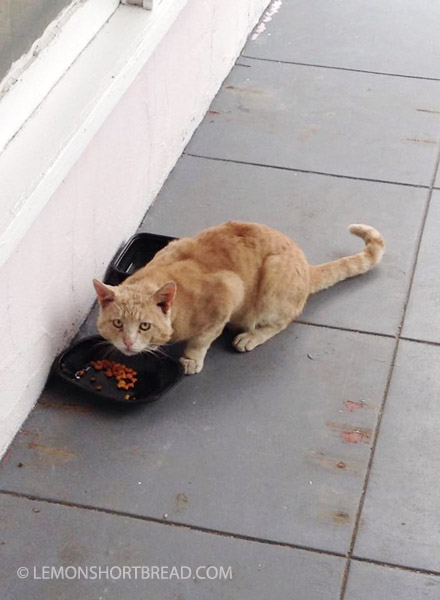 Lookit that face - like a sad lion. How can you not feed him lol. He was very hungry by the way, and probably homeless. This was when he didn't want to leave. 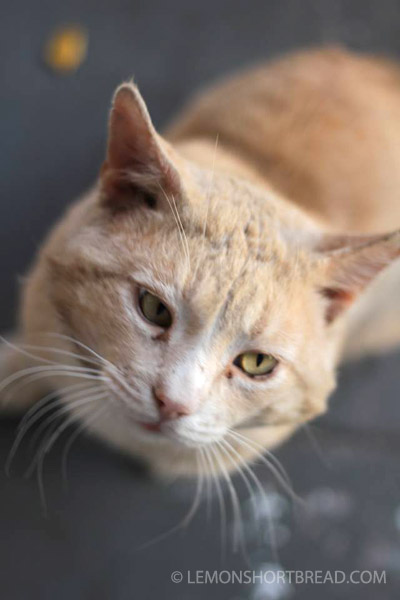 Morris is very vocal with a scraggly mew and is sort of friendly with humans. Voracious appetite and keeps stealing little Lupin's portion! He looks pretty roughed up from fighting and his ear has some injuries. 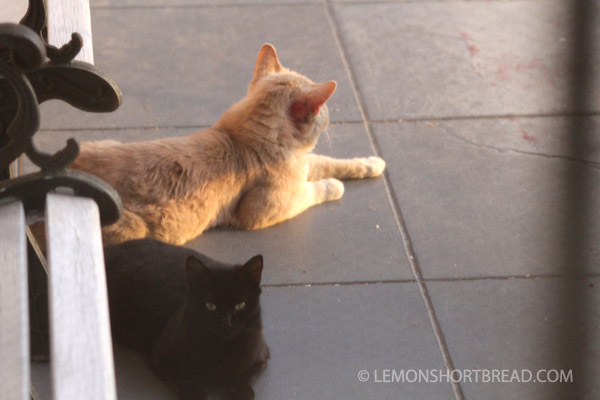 Reunited with a member of the original gang, and got along for a short time. 2 weeks ago Morris started chasing and biting Lupin so we are going to see the situation if Morris should stay or go. There are also 3 other tabby cats fighting on the roof that day.


Video of the cats, mostly Morris.

Edit: We know now Lupin is female. I typed this post some time back and only just published it, unfortunately our 'kitten' Lupin is not a kitten but a very small-sized mature cat and she had her first litter of 3 kittens 2 days back!! We don't know what to do but to leave them in Lupin's selected hiding place (under the house) for now - can't get close to her without her freaking out lol.
Posted by Lemon Shortbread