Hi everyone I have reached Taiwan and on the first day I had a lot of adventures (what you get when you do a self-tour). I am holidaying with my mom as she had nagged me about it ever since three years ago and October was the only time when she was able to take leave from work, so it was a slightly rushed affair. Since my birthday was within the period I figured it was a birthday break. 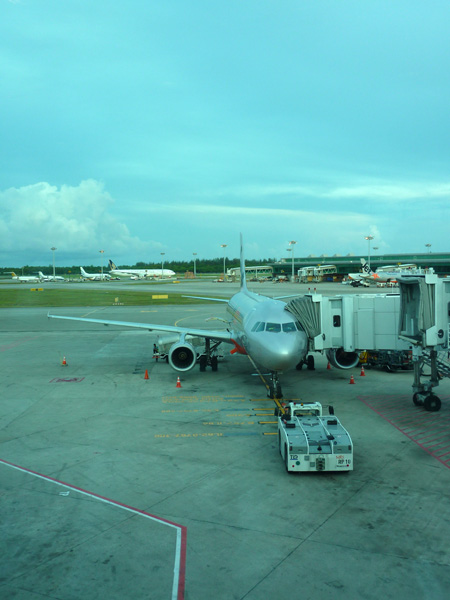 My tickets are from the budget airline, Jetstar Asia, they fly regionally, tickets were about S$325 each, I bought a package deal including hotel for 8 nights at S$850 per person. The catch was food & drinks were for a fee ($3 for a can of Coke anyone? $8 for rice etc) and baggage were limited to 10kg hand-carry (yes they weigh those too). Check-in luggage would be $25 per kg. I was starting to regret this as we brought stuff that isn't going to fit within the weight limit for hand-carry. Upon reaching Taiwan, I was planning to take a bus to our hotel but it was 12.30am and we had missed the last bus. So I took a cab to our hotel for about 1,275NTD. 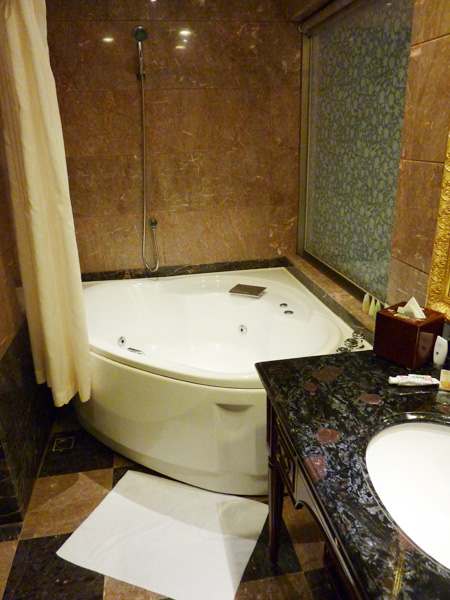 My hotel is the Royal Seasons Hotel, the reason why I chose this place was it had reviews about having a nice big toilet with a jacuzzi, a safety deposit box and the hotel was located beside a 7-Eleven. Well yes, the toilet is quite lovely and the shower area quite large. Notice the glass panel. People on the other side of the room can see you showering, but there is a semi translucent blind you can roll down if you are shy. I forgot to snap the main room, it is slightly cramped but has a comfy queen-sized poster bed with cute drapes.

The wifi did not work, I had to borrow an ethernet cable from the main desk. There wasn't a safety deposit box in my room. Free bottled water, housekeeping replenishes it daily. The site reviews stated they provide L'Occitane toiletries but there are only normal chinese toiletries so eh. There is a one-way shuttle bus service to 3 MRT stations, Zhongshan, Taipei (Main) and Xi-men. You have to make an appointment though... 2 hours is usually enough to secure a seat in the seven-seater van. The service crew are pleasant and polite. Breakfast is mediocre, not a large choice, in buffet style (eggs, ham, toast, congee, rice, seasonal local vegetables, salad or noodles), almost the same dishes everyday. 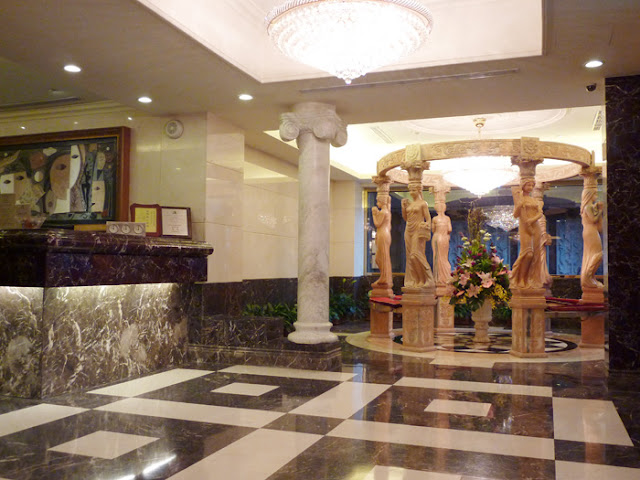 The reviews say it is only 15 minutes walk to Zhongshan station but this is tedious and not recommended, especially when scooters are abundant in Taiwan and you have to cross several roads, take the shuttle!

Talking about scooters, this is the first thing you notice about Taiwan! So many. I understand they are an affordable way of commuting and a necessity if you are living in Taipei and cannot afford a car. It is quite interesting to watch what they are transporting, there are dogs riding on the floor and some with with kids and their mom. Some are balanced with groceries. The riders tend to be rather haphazard sometimes. The problem is this: they tend to weave in and out of traffic, sometimes coming from two directions even though it is a one-way lane (usually the back alleys), also they like to speed and not give way to pedestrians even though the lights are for the pedestrians. Noticed they don't give way to anyone including buses and ride very closely beside and even against incoming buses from the opposite directions. So accidents appear frequent, on the first day I witnessed 3 accidents. When alighting from the bus, you have to watch if there are any oncoming scooters trying to beat the bus doors, they sometimes drive on the extreme right and may collide with an alighting passenger. 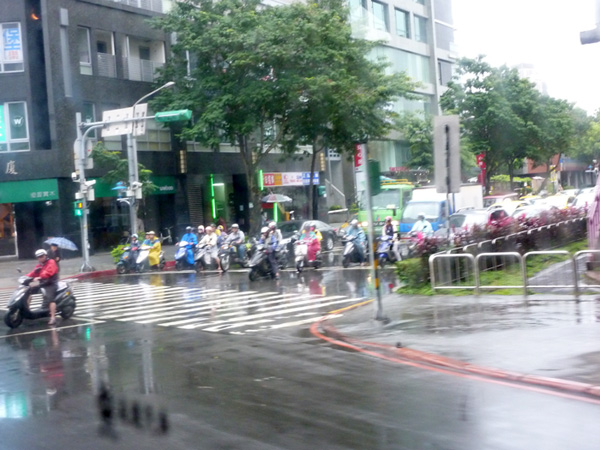 During rush hour the amount of scooters are probably ten times more than this.


My mom was very nervous about this, especially when vehicles turn into the pedestrian crossing rather than waiting for their turn, I had to hold her arm even when crossing a minor lane because of her impulse to run from incoming scooters and taxis (I think this is more dangerous)... but she is used to it now.

The first attraction was the National Palace Museum (國立故宮博物館). I bought an Easycard 悠游卡 for 500NTD (100NTD for deposit, 400NTD worth of credits), took the MRT from Zhongshan (中山) , alighting at Shihlin (石林) using the red line. There are a lot of lost people in Taipei - and I mean these are locals... the roads can be quite confusing. I got asked four times for directions - I am probably more lost than them. Camera + map = noob tourist. 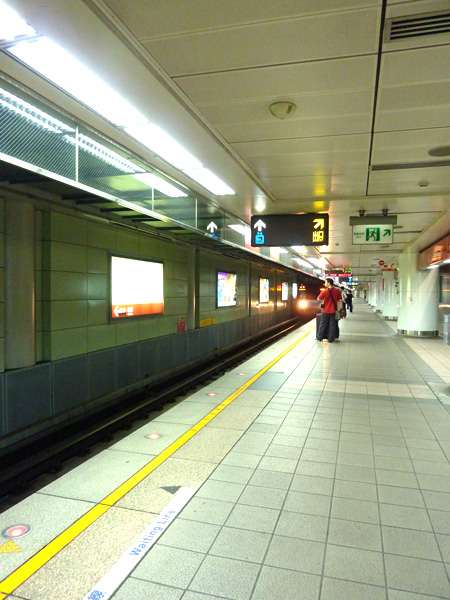 Then take a bus from outside Shihlin MRT. I was supposed to take Red 30 bus but there was another bus with the Gu-gong 故宮 sign on the display and other confused tourists were going to the museum too, so the driver was yelling if anyone wants to go to the museum get on the bus now, so I did lol.

I think it was a special shuttle route heading specially to the museum. Used the Easycard here. The ticketing system is different in Taiwan from Singapore, in Singapore you tap at the entrance and tap out as you exit for all buses. In Taiwan because they calculate based on section rather than individual stops; it's either tap when entering, or tap when exiting, or both. You have to see the sign just above the driver (上車刷卡) or (下車刷卡), if you can't read chinese then ask the driver. You can enter by the front or back but you always exit by the front as the card reader and coin machine is beside the driver.

The buses are clean, but they tend to speed and it gets very bumpy, so hold on tight. The standing passengers tend to get hurled to the front from sudden brakes lol. The younger people are used to this and almost always give up their seats to older folks, sometimes middle-aged folk give their seats to the senior ones, something we should do more often in Singapore really. Many here pretend to sleep or not to see or need prompting before they do it. Anyhow someone-else-will-give-up-their-seat-so-why-should-I mentality. Oh well. One thing nice about Taiwan's buses is if you are not sure where to stop you can ask the driver to tell you when to get down, he/she will yell for you to get off. This is helpful if the buses going to the outer counties and do not show the names of the individual stops on their electronic displays. 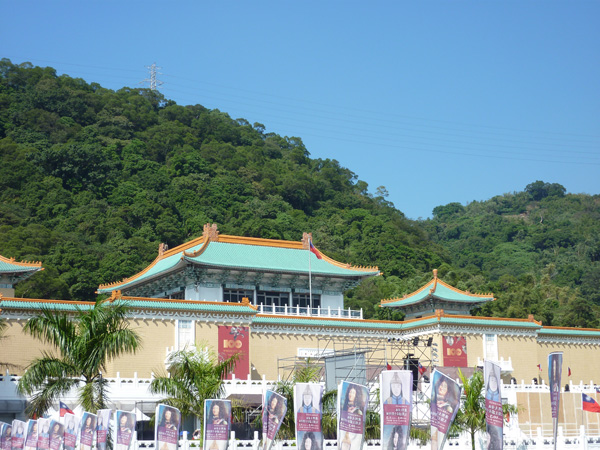 The current special exhibition is some trade and arts artifacts between Emperor Kang Xi and King Louis XVI. This is at the exhibition hall 2. The main exhibition hall 1 holds the permanent collection. They are separately ticketed, cheaper if you buy a combination ticket (300NTD) rather than individually. No photography allowed, but there are many lovely chinese treasures on 3 floors so this is a must go. Oh the weather that day was terrible, it was hot & humid like Singapore...

So after being tired and hungry and disappointed, we decided to go to Shihlin night market for dinner, since it was en route back. On the train we encountered a zany woman who was too loud and overly curious about us, let's just say everyone in the 3 adjoining cabins were staring and eavesdropping (unintentionally) on our conversation. Almost drove me crazy. Anyhow, Shihlin night market is the largest and most famous night bazaar in Taipei. It is about 15mins walk from the Shihlin MRT or Jiantan 劍潭 MRT (4 mins walk).