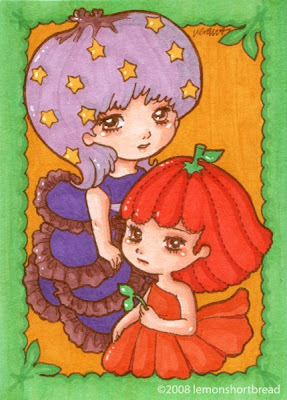 My new ACEO called 'Buddiblooms'.  I had a hard time thinking of a suitable title... most of the time my artworks are called 'Untitled' until it's time to save the file in my computer. That's how the lousy titles pop up! Artwork is made with pen and markers. It is inspired by... pincushions (well, not entirely) =)
For readers who are unfamiliar with ACEOs, an ACEO is a collectible artwork in 2.5 x 3.5 inches. There are no restrictions to what makes an ACEO except for its size. It can be an original or a reproduction print, any topic any medium or media. You can collect by themes, artist, colours or just to fill your walls/ albums! The movement began on Ebay as a form of affordable fine art collecting (either as investment or hobby) and now there are many artists selling quality ACEOs on Etsy as well, so check them out!
Posted by Lemon Shortbread 6 comments:

The link is from Groovey Crafts, I think I'm at an alright speed, might manage at most another word or two if I practise hard enough! Can anyone type 100wpm? If you can you're probably a pianist or a cyborg. 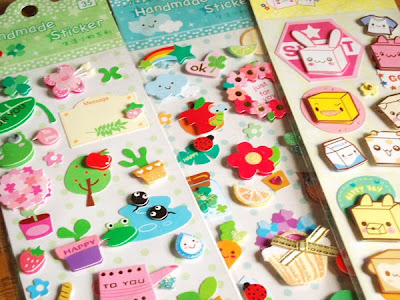 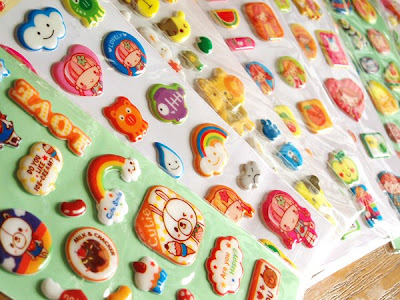 Maybe I'm a little too old for these but they are irresistable! Soooo cute! The ones in the top are double-layered 3-D, and the lower photo are puffy kinds. I bought several styles and plan to use them for some little cards and tags when there's time!
Posted by Lemon Shortbread 5 comments:

YUP IT'S THAT TIME AGAIN... 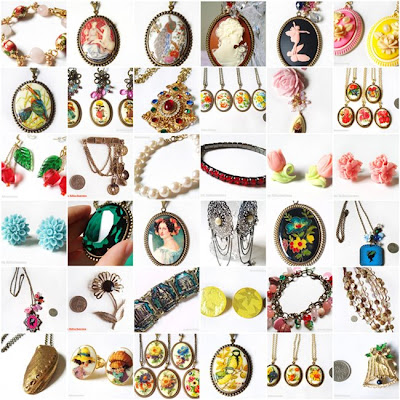 ...to promote my jewelry shop  =)
http://lemonkitscharms.blogspot.com/
Lemon Kitscharms is a blogshop that sells vintage accessories and handmade jewellery, vintage-styled and retro kitsch. I am clearing some of my older stock & contemporary jewellery to make way for more vintage finds in 2009, there's not much left but many are going at a discount. I also sell a little beading supplies so you can check that out too! A blogshop does not come with carts and check-outs, so to order, just leave a comment, your email, country and the item's you'd like and I'll get back to you within a day.
Posted by Lemon Shortbread No comments: 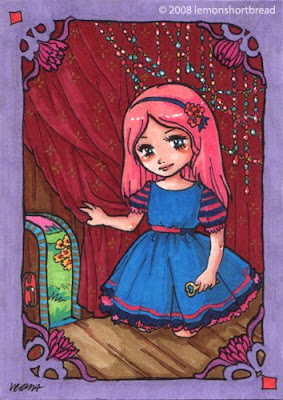 This ACEO is requested by Sweetestpea from Etsy! The scene is my favourite part in the story where Alice discovers a 15 inch door and sees the wonderful land outside and wants to go but her head was too big to fit through. This is made with markers and pen; and matches my other Wonderland artwork with similar borders.
And I'm abit busy with rushing things so blogging is not as regular as usual sorry! Watch the flu bug!
Posted by Lemon Shortbread 5 comments:

I GOT A NEW PHONE! LG SECRET

Alright I pretty much dislike phones but my current Samsung celphone's battery has retired for good (6 years old) so I had to purchase a new one. I upgraded to this shiny new thing: a LG KF750 Secret phone from South Korea.  It is a slider design with 3G capabilities, touchpad navigational buttons, lcd screen, does bluetooth, video calls, google tools including blogger, maps and search, mp3 player, media player, a 5.0 megapixel flash camera that also records video. 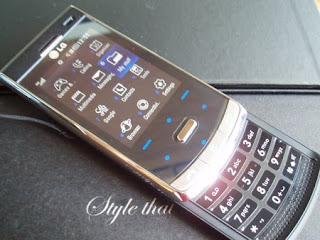 The back is carbon fibre casing with a reflective design. The default games are played by shaking the phone left right, up down. Of course you can download your own games into the phone too. You can add a memory card up to 4 gigs should the phone's memory be insufficient for your videos, music and games. 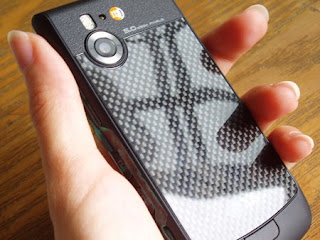 I found the bluetooth wonderful, so easy to transfer files from my computer to the phone without the use of a USB cable! Your computer has to have bluetooth enabled too. The chimes from pressing the keypad while SMSing is a nice change from beep boops. 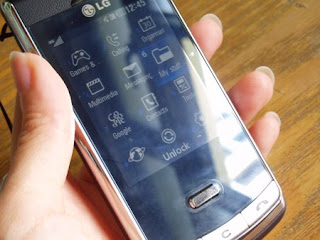 The packaging is very nice; wires and stereo earphones come in separate boxes within the big box. 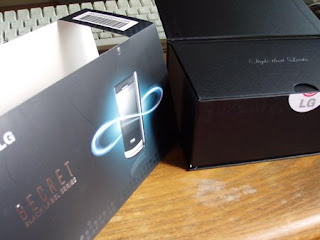 The bad: More colours other than black-silver (iphone lookalike sorta) will be nice. Also it does weigh alittle heavy with all the solid functions. As with all touchscreens, fingerprints on glass annoy me to no end. They include a little screenwiper to clean the glass, but I'll need to replace that shortly! Also the touchpad is not quite obedient, my problems are the right buttons; I always press the top right button when I meant for the lower right button as they are placed closely together. Other times the wrong menu comes up because I had merely tickled the touchpad by accident.
If you are looking to compare the LG Viewty with the LG Secret, the Viewty's back profile resembles a real camera (zoom lens and all that) and it is a full touchscreen without a keypad. The Viewty feels flimsier though it is lighter & width is thicker. It also comes in a different colour other than black.
Verdict: Love it! And at a bargain, S$98 for the phone if I signed a 2-year continuation of my current phone plan. The promo I had came with a free $300 Kenneth Cole watch too.
Edit!: Well now I have some problems cropping up after 2 weeks of use. First, the battery life is much shorter than expected (2 days without much use) and it dies after about 18 photographs (no flash). Second, it's hard to transfer  my files from the phone to my computer, as the bluetooth goes one-way from computer to phone. Much hassle needed, the software included in the CD is useless. Third, I wish I could shut off or lower the volume of the shutter sound when I'm taking photos. Fourth, the touchscreen pad is slow to respond and even with my small fingers the navigational buttons are placed too closed together and you often end up touching the pad even when you don't mean to.
Posted by Lemon Shortbread 3 comments:

Email ThisBlogThis!Share to TwitterShare to FacebookShare to Pinterest
Labels: My boring life, Technology 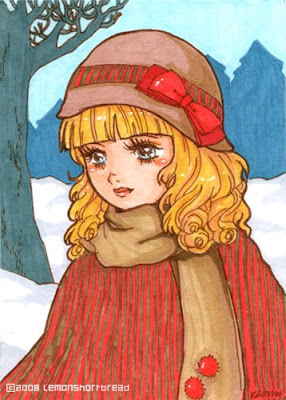 Finally able to come up with a piece of artwork! It came out ok, the sketch was originally a geisha but I wanted a hat and curls in her hair like a doll. Made with pen and markers, available in my Etsy shop here:
Scarlet in Winter ACEO
I hope to do more art soon when there's time for it, now I'm just busy making a billion necklaces, well not really... just about 20!
Posted by Lemon Shortbread 7 comments: 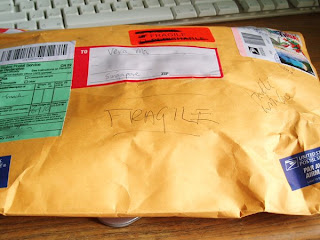 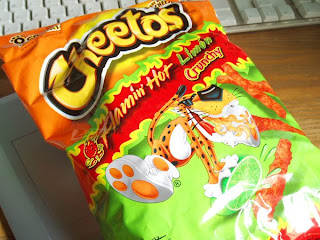 Yes it's a big fat packet of Cheetos, flown all the way from California to Singapore! We have Cheetos (hard to find though), and the jalapeno flavour which I relish is not available here. Unfortunately my sis couldn't find the jalapeno flavour so settled for Lemon Flamin' Hot which is good still, but jalapeno is the bestest. This is for my birthday by the way (29 Oct).. yes I know.. you want junk food as your present?! to echo my sister's reaction lol. They came all unsmashed because of the 'Fragile' sticker on the package too =)
Check out these cheese-y artworks on Etsy: 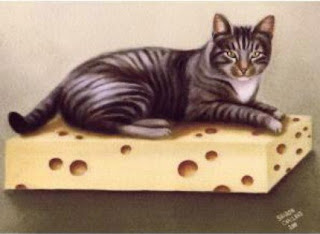 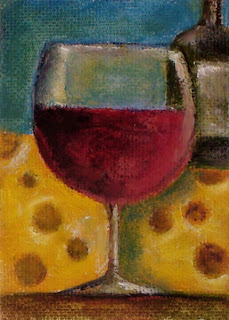 Red Wine and Cheese by JMacGallery
**** 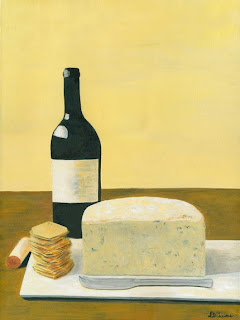 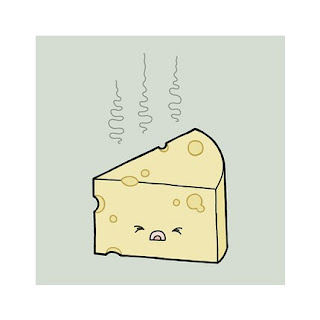 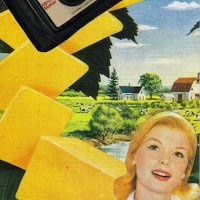 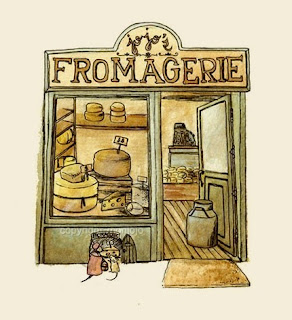 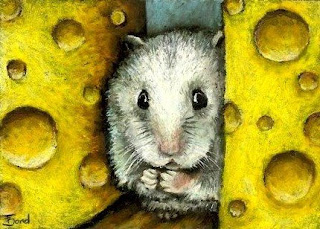 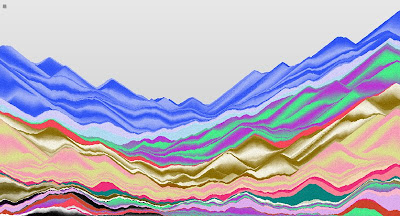 In need of some creative stimulants? Check this site out: http://thisissand.com/
It is a play site where you move your mouse over a blank 'canvas' and the pixels will turn into simulated sand. Very cool and a great way to relax. You can pick the colours too. Just click on that little grey square on the top left for instructions. My piece featured above doesn't mean anything, I just wanted to play with the colours!
Posted by Lemon Shortbread 2 comments:

MesmanBlog has mentioned my 2 ACEOs in their blog HERE! Thank you~ =)
Visit their photography and blog: http://mesmanimages.blogspot.com
++
Also I've been tagged again, this time by ArtbyMar! Please feel free to grab this and post it on your blog and tag others!
RULES:
* Link to your tagger and list these rules on your blog.
* Share 7 facts about yourself on your blog, some random, some weird.
* Tag 7 people at the end of your post by leaving their names as well as links to their blog.
* Don't forget to let them know they have been tagged by leaving a comment on their blog.
1. Don't like the sound of plastic bags, though sound of paper bags are nice (I collect them)
2. Mathematics is hard to understand, especially trigonometry.
3. Phones and doorbells are best when they don't ring.
4. My favourite colour  is salmon pink, and sunset colours.
5. I've never drunk coffee. I tried a teeny sip when little and that put me off permanently.
6. I've worked for a plant nursery and know some info on tropical plants (probably forgotten most of them by now)
7. I never had interest in accessories but worked for a few fashion companies and dabbled in selling/ repairing them. Now I'm selling jewellery, and it's strange because I seldom wear jewellery, don't even wear a watch. Don't have pierced ears. I like what I'm doing now because of the floral cabochons and admiring vintage designs... Besides drawing of course =)
++
Check out what my aunt sent me! She found 3 more vintage embroidered postcards bought in the 1950s from Spain! Too bad they're mouldy from Singapore's humidity... one reason why I don't collect paper goods or do art trades... can you bear to let your artwork be destroyed by mould infection? 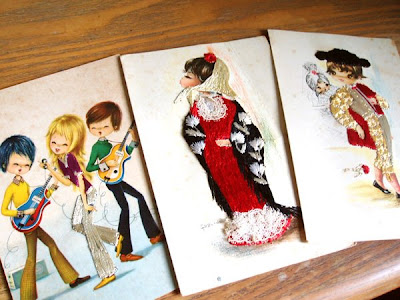 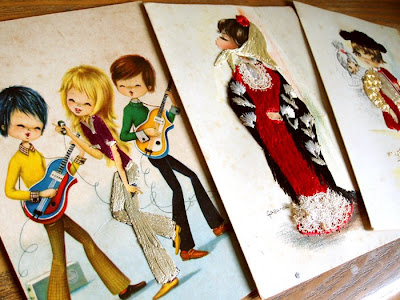 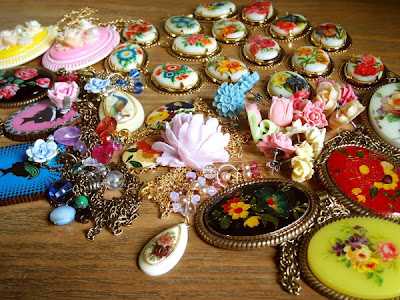 All those in the photos are floral themed necklaces! Hehe I love em too much. This is also the reason why I've been slacking off blogging - to prepare for early Christmas sales for my jewellery shop... Visit it at: http://lemonkitscharms.blogspot.com
I'll be uploading more throughout the week, so do check them out if you're interested in buying a gift for someone! Please shop early, you know how finicky the postal offices get especially at Christmas season, packages can take up to 8 weeks to reach anyone for international airmail!! So now is the perfect timing if you plan to shop online before the post offices start delaying because they are swamped.
Also a belated Happy Halloween (we don't have this festival in Singapore though!) Lastly, I'll be heading to the US from mid-December to mid-Jan =) so my shops won't be open during that period.
Posted by Lemon Shortbread 7 comments: