After a meal of pork ribs soup & two pairs of cheap shoes at the mall, I dropped by Clarke Quay for some night shots. 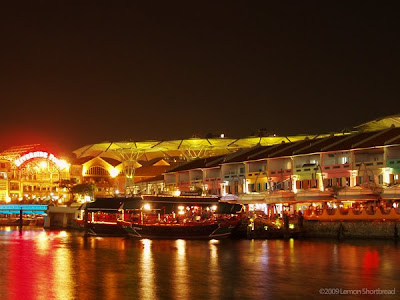 Clarke Quay lies along the Singapore River. At night, the pubs and chill-out lounges come alive, also lots of coloured lights and music. I've never really seen the place at night previously. In the past there were afternoon Sunday flea markets here but they have been scrapped in favour of the lounges. 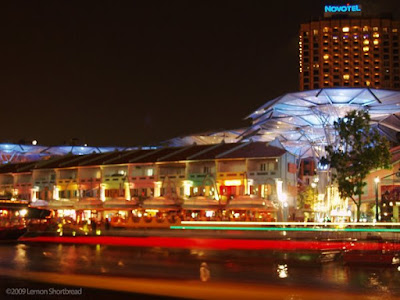 The streaks of light are moving bum boats in the river. I thought to test out the low shutter speed night settings on my semi-wacky camera - by setting it on the floor while finishing the rest of my ice-cream (lol I'm no photographer). You can take a ride on the boats for a fee if you'd like a short tour of the river.
Posted by Lemon Shortbread

These photos are gorgeous! I especially love the flashes of light, but I expected them to be cars. Now you've got me wanting to visit Singapore!

This is the best blog I have ever read thank you!