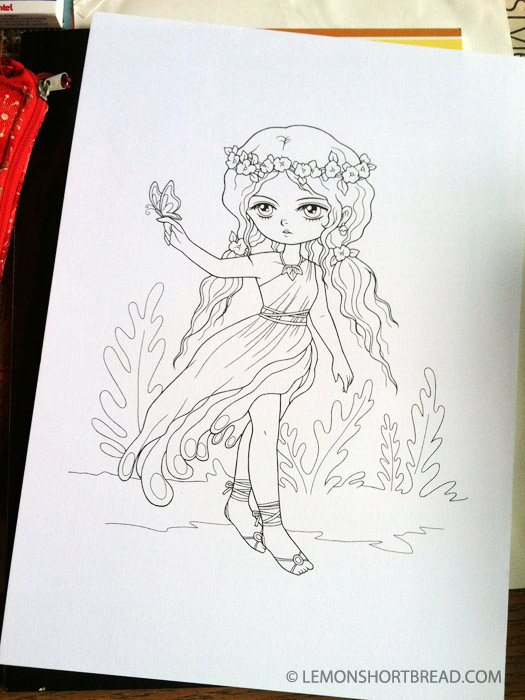 I am going to do a quick tutorial / experiment on alcohol-based markers coloured on inkjet printed digital stamps. Some crafters hesitate to use digi stamps and rather stick to rubber stamps because of the issue of smearing or smudging of lines when they use markers on printouts. It is a bit of trial and error, to each his own! Previously I thought a laser printer would solve the problem of smeared lines when using my Copics but the smears persisted. My initial impression was alcohol-based markers dissolves toner so don't know if I didn't wait long enough or needed to heat set it further. Some people have had luck getting laser-printed lines to stay put, you should try both out anyhow.

Since most inkjet ink is water-based, I also worry about it smudging. I am currently using an Epson inkjet printer (XP-402) with its Epson Home Claria inks (model 177) - thankfully I did not have any problems! In fact I sprayed fixative at first to seal the lines but that seemed to make blending difficult. In this blogpost, I did two tries - one with fixative and one without.

First let's look at the one sprayed with fixative. You may get different results depending on the inks and markers you are using. I am using ordinary cartridge/ cardstock paper in A4 - it is called Drawing Block paper here in Singapore, the inexpensive common kinds they use at school. 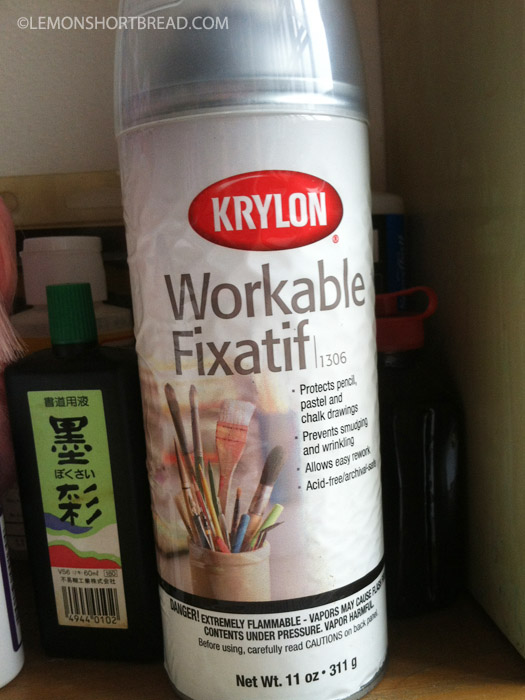 I use the Workable Fixatif by Krylon, sprayed it on the printout, and waited for it to dry. 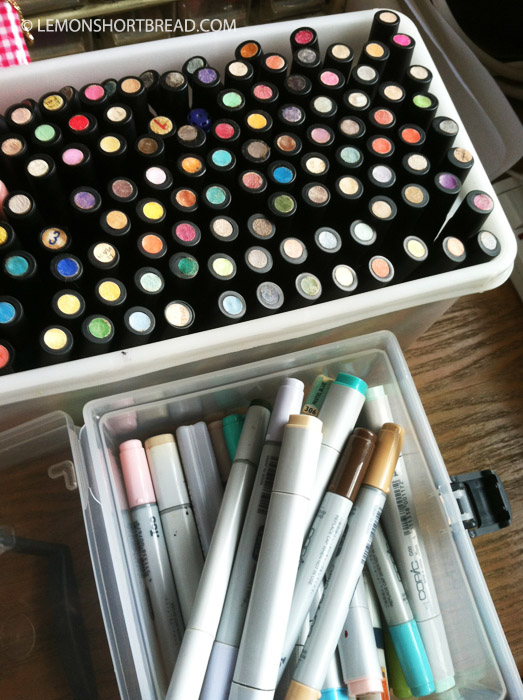 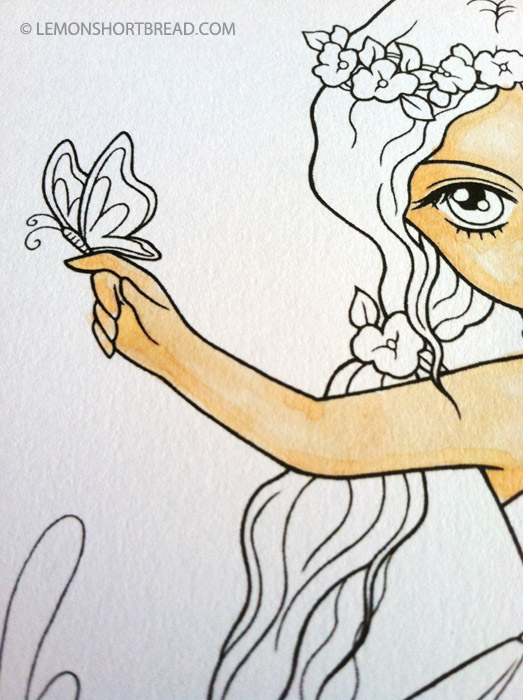 I coloured her skin first. The photo doesn't show it as obviously, but the colours don't blend, especially if the colours are from different hues. I used Copic 'Pearl White' (yellowish) with a layer of Copic 'Skin White' (pinkish) and did not like the effect at all. After that I tried out the blender directly on it (I know, wrong way of using lol) and made things even worse! I can't tell for sure if it was due to the fixative sprayed earlier. 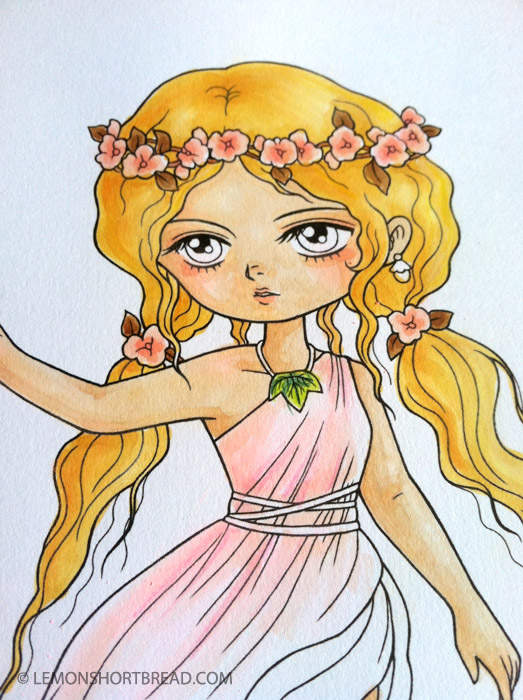 If you look at the flower headband I used two pinks from the same family, so they blend okay. In this case perhaps dry media work best if you need to use fixative. Or just use one tone of marker colour. Anyhow I ruined the picture (see the disaster on the arm on the right and part of her face ) and decided to experiment with some colour pencils and soft pastels while I'm at it. 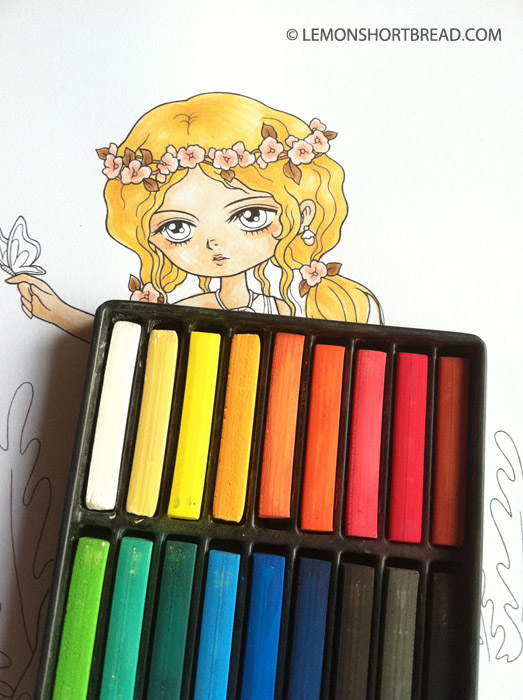 My colour pencils (just ordinary ones) are waxed, so the pastels do not stay on top of areas that has pencil marks on it. Put the soft pastels on first and then pencils. Again, I did not like the effect lol. My pencil leads are hard from being old, I might get new better ones. Next is the no-fixative-on-printout experiment, pretty straightforward so I'll just show the finished result since it was night by the time I finished colouring. Reprinted the image on a new sheet of cartridge paper and waited for it to dry. Coloured with markers directly on top and the lines stayed put! The Epson 177 model ink cartridges are not too expensive and in the lower priced range. Quite happy with my printer by the way - it's got wifi. This time I didn't use Pearl White for the skin. 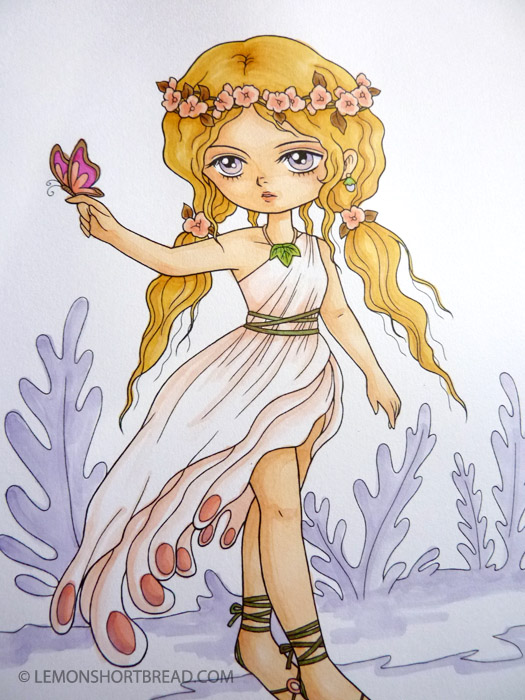 This is after I have done all the colouring with markers. I was careful to avoid the lines as much as possible and not press too hard just in case. 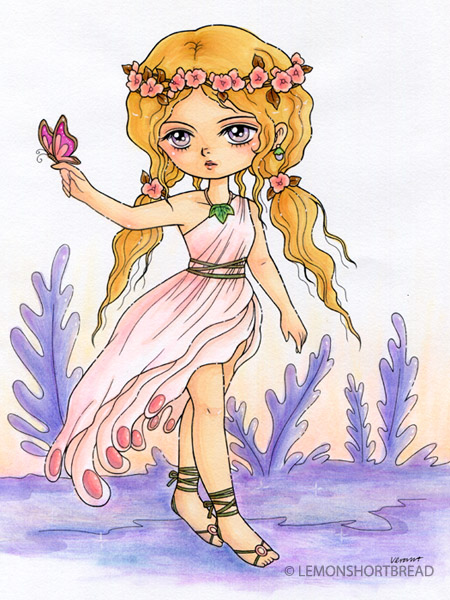 This is the finished piece, after adding some pastels and colour pencils. After that I sprayed fixative to secure the pastels.
Posted by Lemon Shortbread