I messed up abit on this ACEO card but it came out alright in the end!

It is available in my Etsy shop here:  Austere Polka-Dot Cat

Also remember the newborn kitties in my May post here: Let Sleeping Cats Lie? They're grown up now and sooooo cute! Pluto and a yawning Squeek. Squeek sucks fingers after just weaned off... doesn't do it now. Squeek more grown and sleek! Still can't tell the difference between her and Yoshi. This is Yoshi who likes watching TV on the monitor. They all watch tv really. Yoshi looks exactly like his uncle Fuman. That is Fuman's toy he's playing with: a bell inside a gashapon case. With Jojo the dog. Pluto in his playpen. Amazing how a used box can be fun for him. 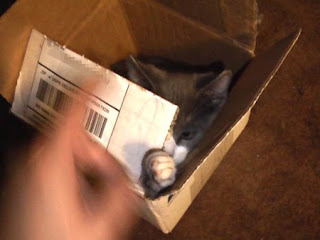 Ambushing behind the flaps. We still see him though!

Those photo's of the kittens are cute too. Cats are so fun to take photo's

The ACEO is wonderful!